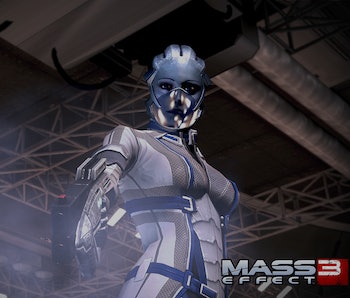 Sometime in late 2007, I had been playing BioWare’s sci-fi RPG Mass Effect on a weekend binge when I was confronted with probably its most difficult choice.

I was staring down a hotheaded and stubborn subordinate, Wrex, a toad-like alien mercenary the size of a bear. His species, the Krogan, had been plagued for centuries by a disease that left most of its females infertile, leading the Krogan to near extinction across the galaxy.

We had a chance to cure them. I wasn’t willing to take it.

On the planet Virmire, the enemy Saren — a rogue government agent aligned with a dangerous, mysterious threat to the galaxy — had set up base some klicks away from our fort. Our allied scouts tell us Saren has been researching a cure and his work remains inside his fortress.

Saren wasn’t researching out of philanthropy. He wanted the brute strength of the orc-like Krogan at his command, and curing them would win their loyalty. We’d be totally fucked, but Wrex only saw “cure.”

I had to convince Wrex it was the right choice. The only choice, really, because who knows what else Saren was cooking? Wrex wouldn’t hear it, and in a heartbeat we brandished our rifles into a John Woo stand off. Seeing no way out of this, I signaled one of my soldiers and she fired a shotgun into Wrex’s back.

For a few years in the late 2000’s, video games developed an obsession with giving players moral choices within the narrative. There are earlier examples, but through the seventh-generation of video gaming this trend populated.

Roughly around this time, video games entered a minor culture war that challenged the hobby’s artistic integrity of video games. Film critic Roger Ebert blasted games, which he thought “represent a loss of those precious hours we have available to make ourselves more cultured, civilized and empathetic.” Predictably, this started a clash of thinkpieces and lectures, which included a surprising number of game developers siding with Ebert, including Metal Gear Solid creator Hideo Kojima and Michael Samyn and Auriea Harvey, the founders of indie game studio Tale of Tales.

Enthusiasts desperately want/wanted the prestige associated with the very word art, “the exclusive club that every cultural producer desperately wants to enter,” Polygon writer Eric Zimmerman said last year. Among other methods, developers responded by introducing the then-groundbreaking ability to participate in the game’s narrative by allowing players to express their morals through branching options that impact the story.

The results were mixed.

Some were great at it. BioWare specialized in moral gaming, most famously with 2003’s Star Wars: Knights of the Old Republic and 2005’s Jade Empire, prior to Mass Effect, which catapulted the trend to the rest of the industry. Mass Effect was like Battlestar Galactica made into a choose-your-own-adventure, allowing you to direct the outcome of events based on actions and conversations. Its morality system — Paragon vs. Renegade — allowed you to ponder the moral grey that shades your effort to save the galaxy.

As a series, it was cool to encounter characters and see the ripple of your choices from Mass Effect play out into Mass Effect 2 and 3. Yeah, the very end of Mass Effect 3 farted all over your efforts, but it was still a thrill while the journey lasted.

Other games phoned it in. inFamous Second Son, the 2014 sequel to the PlayStation-exclusive inFamous, had a bit of a pedantic system that was too hot or cold in the decision spectrum. Worse, you were rewarded with perks that dulled the impact of making any difficult decision. Adding salt to the wound, inFamous didn’t have a compelling narrative that made Mass Effect and its moral choices feel weighted. It painfully exhibited how our moral dilemmas can just be kind of a marketing gimmick.

Telltale Games’ The Walking Dead series, The Last of Us, Heavy Rain, Fallout 3, and literally every game on this entire list made use of karma systems that quickly wore out its welcome, and by 2014 gamers questioned its de-evolution and dated purpose.

Are games art? I like to think so, and I relentlessly argue for it when confronted with the challenge. But it’s discouraging when other perceived forms of “art” — theatre, films, literature — naturally come with ethical dilemmas where games have used it as a bullet point in a press release.

More like this
Gaming
18 hours ago
You need to play the most exhilarating free game on Nintendo Switch Online ASAP
By David Grossman
Gaming
8.10.2022 5:30 PM
Forspoken's latest trailer is so bad that it became a meme in seconds
By Willa Rowe
Gaming
8.9.2022 6:15 PM
Guilty Gear Strive just made its new DLC fighter a queer icon overnight
By Jess Reyes
Share: