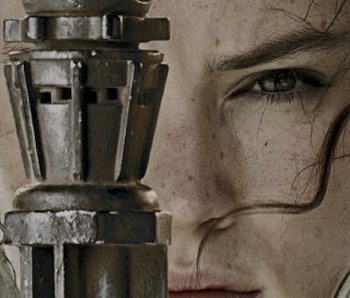 We don’t know for sure what Rey’s yellow lightsaber looks like at the end of Star Wars: The Rise of Skywalker. Is it a single- or double-sided blade? Was it made from her old fighting staff? The movie doesn’t make it explicit, but a piece of recently released official concept art might be seen as confirmation that it ignites on both sides. Even more? It might separate in the middle into two distinct blades.

In a Twitter thread, Korean Star Wars fan @fpdlffh posted a series of images from the alleged Rise of Skywalker art book on Friday, revealing an intimate look at the film’s development that includes everything from alternate versions of Dark Rey to the totally creepy Oracle monster Kylo Ren almost spoke to.

The Art of Star Wars: The Rise of Skywalker won’t officially be released until March 31, 2020 after it was delayed in December, but in a few pieces of concept art, we see Rey wielding several different lightsabers, including what looks like Luke’s green lightsaber. But in another, we see Rey facing off against four training bots with her staff, and there’s a lightsaber beam extended from either end of a very long handle that looks a lot like a modified staff.

Fans will obviously remember that Rey visits the Lars Homestead on Tatooine at the very end of The Rise of Skywalker where she buries Luke and Leia’s blue lightsabers. When approached by a local, she reflexively ignites a yellow lightsaber extending from the tip of her staff. She doesn’t ignite the other side, so as much as we might hope she has a double-sided lightsaber like Darth Maul, we never knew for sure. This concept art, however, can be more or less taken at face value as confirmation. Many of the basic designs and plot beats are consistent with what happens in the movie.

What’s more is that in yet another piece of concept art, Rey is backflipping away from the training bots and it looks like her’s split her lightsaber in half and dual-wielding them instead. If that is indeed the case, then that means Rey’s weapon(s) is similar to those wielded by Asajj Ventress in The Clone Wars.

The hilt of both sabers were curved and they had a unique function that allowed them to be joined at the base, making for a peculiar-looking double-sided red lightsaber with a bend in the middle.

Interestingly enough, these sabers were stolen by Barriss Offee, a corrupt Jedi that wanted to frame Ahsoka Tano for the bombing of a Jedi Temple hangar during The Clone Wars. Asajj Ventress then acquired a single-bladed yellow lightsaber on the black market that she used for quite some time before her death at the hands of Count Dooku.

What all of this ultimately means is that in terms of lightsabers, Rey actually has the most connections to Asajj Ventress than any other Force-wielder; Both used yellow blades and double-sided lightsabers that separated in the middle. Who else could you say that about? Particularly if you count Dark Rey’s double-sided red lightsaber with the folding hilt, then the connections get even stronger.

None of this means they have any actual connection, but it creates interesting synergy between two of the coolest and most powerful female Force-wielders in Star Wars history.

Star Wars: The Rise of Skywalker is now in theaters.