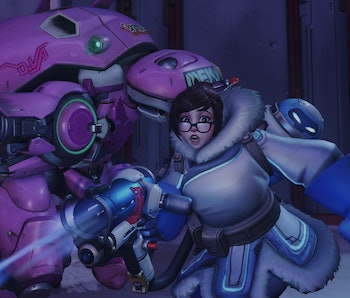 Blizzard added Baptiste to Overwatch in early 201. Since then, the hybrid healer/damage-dealer has become a force to be reckoned with. He’s widely considered the best support hero in the game and is almost always picked up in competitive settings thanks to his versatile kit. But one of his defining abilities took a heavy hit in the 1.44 Public Test Realm (PTR) update.

The Overwatch team posted a new batch of patch notes for to the PTR Thursday, which heavily nerfed Baptiste’s Immortality Field. This umbrella-like ability protects allied heroes inside from dying. A well-placed and well-timed one can completely turn the tide in a crucial team fight. But those kind of clutch plays are going to get a bit harder to pull off.

Baptiste is by far the main focus of this patch, though Mei also was hit by some nerfs to her offensive abilities, while D.Va received a potential monumental buff.

Here’s what to expect from the most recent PTR patch.

Baptiste’s Immortality Filed will still be an extremely powerful ability even after these nerfs hit public servers, but players will need to be much wiser about choosing when to use it.

It lasts three seconds less time if it isn’t destroyed, and its cooldown has increased by 25 percent. That will make it the second longest ability cooldown in the game, second only to Mercy’s resurrection skill.

To top it off, his ultimate Amplification Matrix will become harder to obtain through a game. That means players will need to step up their healing and damage output if they want to build up the ultimate as fast as it was before.

It might only be one buff, but it made one of D.Va’s strongest moves even stronger. Her mech has a massive body, but that’s balanced by her superior mobility, thanks to her boosters. Now, players will be able to use them much more frequently.

D.Va is at her absolute weakest when she can’t use her boosters, now she’ll be in that state 40 percent less of the time. This will let her more effectively escape danger, aggressively make space for her team, fly in with Defense Matrix to block an ultimate, and be more of nuisance overall.

Mei can be especially infuriating in close-quarters battles because of her freezing beam that slows enemies to a halt. Now, it’ll be easier to disengage whenever you find yourself in a room with her.

Her primary fire will still take the same amount of time to freeze enemies, but it won’t lower their movement speed as much and for as long as it did before.

All shields were nerfed in a previous patch and because of that many tanks received buffs to their other abilities. Orisa’s Fortify cooldown was decreased from 10 to 8 seconds and it might have been a bit too much.

“Orisa has been a little too difficult to deal with while Fortify is active,” state the 1.44 patch notes. “So we’re reducing the amount of damage reduction to give enemies more effective damage during this time.

Hanzo is a deadly hero if you’re proficient at predicting your opponent’s movements. His arrows deal massive damage and have some of the best burst potential in the game. Reducing arrow speed means he’ll be less effective at long ranges, but remain a beast at mid-range.

Finally, the ending animation of Doomfist’s uppercut was slightly increased to make it easier to deal with him. The unorthodox DPS character relies heavily on comboing abilities together to quickly get in, deal massive damage, and get out.

The Overwatch team thought he was able to act out of uppercut too quickly, thus making him very difficult to burst down.

The Overwatch PTR server is only available on PC, but many of these changes will likely come to PS4, Xbox One, and Nintendo Switch eventually.