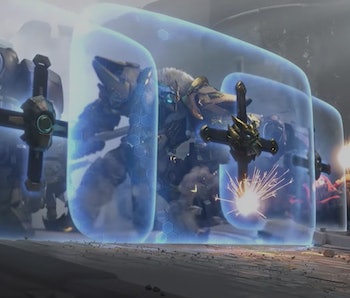 Overwatch has recently been dominated by a shield tank strategy, which has made characters like Sigma and Orisa into must-use heroes in competitive matches. Blizzard Entertainment aims to make this tactic less commonplace with its latest Public Test Realm (PTR) update.

The Overwatch team posted a new batch of patch notes coming to the PTR Wednesday night, which included massive nerfs to Orisa, Sigma, and Reinhardt’s shields. These changes are currently only available on the PC-only PTR server, but Overwatch community manager Molly Fender wrote that most of the updates will eventually make it on to PlayStation 4, Xbox One, and Nintendo Switch.

The widespread weakening of barriers will have a major impact on the overall pace and flow of games. Blizzard made sure to balance these nerfs with overall buffs to armor and improvements to the three tanks’ other abilities.

“Changes to armor, Orisa, Sigma, and Reinhardt are aimed at decreasing the overall amount [of] time players spend damaging barriers while improving the individual heroes in other areas,” wrote Fender.

Low-fire rate and precision-based damage dealers, like Widowmaker and Ashe, should be more effective with these changes. They’ll have to spend less time spamming down shields and more time lining up headshots.

Here’s what to expect from the most recent PTR patch:

That means every hero with the yellow health bar will be able to soak up more incoming shots and survive longer during team fights.

These changes make heroes like Orisa, Reinhardt, and Brigitte even more effective at tanking rapid fire weapons or shotguns that deal damage by firing low-damage hits in quick succession.

Orisa’s shield is now substantially easier to break through, which means she’ll need to rely on other skills and smart positioning to keep her and her team safe. This is a game-changer: most Orisa players have tended to place another shield every time it’s off cool down. Her movement speed, Fortify, and armor buffs should allow her to block more damage with her body and rely less on her shield.

Sigma’s shield took a massive 40 percent health nerf and will regenerate more slowly, forcing players to use it sparingly. Blizzard continues the trend of letting the tank body block more effectively with Sigma.

Kinetic Grasp works a lot like D.Va’s matrix, absorbing incoming projectiles and converting their damage into a temporary shield for Sigma. He’ll be able to use the skill more often and, if timed properly, will get more shield out of it.

Overwatch’s OG shield tank also suffered a beefy nerf to his trademark shield. But the the hammer-touting knight will be able to move faster when his shield is out and won’t be as affected by abilities that push him around.

Those two buffs are relatively substantial, since positioning with Reinhardt is key to his success in battle. Plus, the tank has 200 armor, so he’ll greatly benefit from the overall armor buff.

Changes to everyone else

The PTR patch primarily focused on toning down reliance on shield tanks, which many Overwatch fans found annoying. But it also included buffs to D.Va, Torbjörn, Genji, and Zarya, as well as nerfs to Widowmaker and Moira.

The Overwatch PTR server is only available on PC, but many of these changes will likely come to PS4, Xbox One, and Nintendo Switch eventually.

More like this
Gaming
6.21.2022 4:27 PM
Everything you need to know about Crisis Core: Final Fantasy VII Reunion
By Hayes Madsen
Gaming
6.23.2022 4:00 PM
You need to play the best cyberpunk RPG trilogy on Xbox Game Pass ASAP
By Robin Bea
Gaming
6.22.2022 3:00 PM
TMNT: Shredder's Revenge is the retro beat ‘em up of your dreams
By Robin Bea
Related Tags
Share: