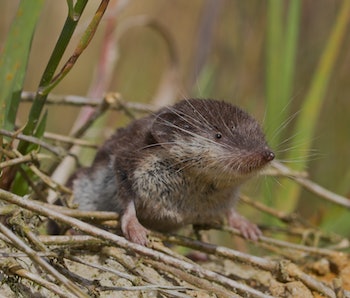 There’s a gnarly STD spreading in Germany — but in this case, the ‘S’ is for ‘shrew.’

Known as Borna disease virus 1, or BoDV-1, this shrew-transmitted disease has previously been reported in animals, including livestock, for years. Scientists had no idea whether it affected humans — but now they know. Not only can humans get BoDV-1, but, if they do, it also may be fatal.

In a new study, a team of German researchers lay out what we do and what we don’t know about BoDV-1. It turns out that the bicolored white-toothed shrew, Crocidura leucodon, is the only known natural host for the disease. But mysteriously, the human-killing virus infects the shrews “without apparent clinical disease.”

In humans, BoDV-1 can cause encephalitis, a rare condition where the brain becomes inflamed. The condition can be mild, with headaches and flu-like symptoms. But in more severe cases, it causes confusion, hallucinations, seizures, loss of sensation, and even death.

What’s wild is that researchers don’t know how — or why — humans are getting the disease. BoDV-1 is a scientific mystery.

The study was published this week in the journal Infectious Diseases.

The researchers reviewed health data for 56 patients with encephalitis over 20 years, from 1999 to 2019. They found BoDV-1 antibodies in eight of the samples — previously unknown cases of humans contracting the virus. The data suggest that they each got it individually, so it wasn’t transmitted person to person. Instead, they likely picked it up from nature — nature meaning shrews.

These sometimes-venomous, small, furry creatures which we might ordinarily ignore are the likely culprits, the researchers find.

So how does a shrew come to inflict this dangerous virus on a human? Unsettlingly, the researchers don’t know. But some forensic detective work does point to a likely suspect: it may the work of a middle man — or middle feline.

Five of the eight patients with BoDV-1 owned cats, Martin Beer, professor at the Federal Research Institute for Animal Health and author on the study, told Science. At least two of those cats had brought home small mammals at some point — including potentially contaminated shrews.

The risk of getting BoDV-1 is quite low, and researchers expect that as they continue studying the virus, they’ll find more cases on the mild end of the spectrum. But if you live in Bavaria and have an outdoor cat, maybe keep an eye on the rodent “presents” they bring you.

Background: In 2018–19, Borna disease virus 1 (BoDV-1), the causative agent of Borna disease in horses, sheep, and other domestic mammals, was reported in five human patients with severe to fatal encephalitis in Germany. However, information on case frequencies, clinical courses, and detailed epidemiological analyses are still lacking. We report the occurrence of BoDV-1-associated encephalitis in cases submitted to the Institute of Clinical Microbiology and Hygiene, Regensburg University Hospital, Regensburg, Germany, and provide a detailed description of newly identified cases of BoDV-1-induced encephalitis.

Methods: All brain tissues from 56 encephalitis cases from Bavaria, Germany, of putative viral origin (1999–2019), which had been submitted for virological testing upon request of the attending clinician and stored for stepwise diagnostic procedure, were systematically screened for BoDV-1 RNA. Two additional BoDV-1-positive cases were contributed by other diagnostic centres. Positive results were confirmed by deep sequencing, antigen detection, and determination of BoDV-1-reactive antibodies in serum and cerebrospinal fluid. Clinical and epidemiological data from infected patients were collected and analysed.

Findings: BoDV-1 RNA and bornavirus-reactive antibodies were detected in eight newly analysed encephalitis cases and the first human BoDV-1 isolate was obtained from an unequivocally confirmed human BoDV-1 infection from the endemic area. Six of the eight BoDV-1-positive patients had no record of immunosuppression before the onset of fatal disease, whereas two were immunocompromised after solid organ transplantation. Typical initial symptoms were headache, fever, and confusion, followed by various neurological signs, deep coma, and severe brainstem involvement. Seven of nine patients with fatal encephalitis of unclear cause were BoDV-1 positive within one diagnostic centre. BoDV-1 sequence information and epidemiological analyses indicated independent spillover transmissions most likely from the local wild animal reservoir.