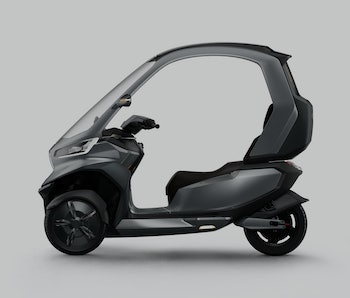 Niu, a major Chinese electric scooter manufacturer, is coming to the United States. Ahead of the company’s big move, it’s unveiled a bold new way to get around cities: a three-wheeled, electric vehicle with limited autonomy and the ability to balance itself.

The unveiling comes as Niu expands its offerings from China and Europe to include the United States. Electric mopeds are huge news in China: in 2018, the country accounted for around 90 percent of the 40 million vehicles sold globally. The figures helped the country claim more electric vehicle sales that year than every other country combined, reaching 22.7 million.

Niu’s self-balancing TQi-GT, unveiled Tuesday at Las Vegas’ Consumer Electronics Show, is geared at “riders of any experience level.” It has a range of up to 150 miles, which the company claims is “more than a week” of urban commuting. It can reach a top speed of 50 mph. It also offers safety features like an anti-lock braking system, and autonomous driving features like self-parking mode. It’s one of two vehicles set to enter production in the summer.

Although not the first self-balancing vehicle of this kind — Honda revealed a self-balancing motorcycle at the same show two years prior — it could be the sort of eye-catching design that entices an otherwise-skeptical American public.

“No matter where we go in the world, we find that people in highly congested urban areas are looking for alternative modes of transportation. There is a new generation of commuters searching for cleaner, smarter and more efficient ways to get around their city,” Yan Li, CEO of Niu, said in a statement.

Niu, a Chinese word which can be translated as “bull,” is big business back in China. In its Nasdaq initial public offering filing back in September 2018, Niu described itself as “the largest lithium-ion battery-powered e-scooters company in China.”

It’s now bringing its expertise in electric scooters and the market to the United States. The company first started in the market with a fleet of 1,000 mopeds in the New York borough of Brooklyn, as part of a partnership with Revel. The partnership has since expanded to Washington, D.C. and Austin, Texas.

As part of its expansion plan, outlined Monday, the firm will open flagship stores in cities around the country. Stores in Austin, Miami, Fort Lauderdale, San Francisco, San Diego, D.C., Chicago and Honolulu will offer interested buyers the chance to try out the vehicles ahead of launch. The move stands in stark contrast to Tesla, another electric vehicle firm vying to convince a skeptical public, which announced in March 2019 plans to close half its stores.

The first is the NQi-GT Pro. It offers two removable 35-amp-hour Panasonic batteries that charge up in three hours. It offers a maximum power of 3,800 watts through a Bosch motor and 80 miles of range. It has a top speed of 43 mph.

The second is the MQi+ Sport. This uses a 42-amp-hour Panasonic battery that charges in seven hours. The maximum speed is either 28 mph or 15 mph depending on the model. It has a range of between 45 and 60 miles.

All Niu’s vehicles will come with a pre-paid SIM card for connecting to the smartphone app. This enables GPS tracking, diagnostics and anti-theft measures. The app and connected features also enable the bike to “learn” how a specific rider uses the vehicle, factoring in data like acceleration and average ride speeds, to adjust its performance. In the future, the company expects to offer 5G connectivity.

The company announced two new vehicles this week, both set to use this 5G connectivity. Beyond the self-balancing TQi-GT, Niu also revealed the RQi-GT, an urban electric motorcycle that offers speeds of up to 100 mph.

The motor offers a peak output power of 30 kilowatt-hours.

Both vehicles are set to enter mass production in summer before reaching consumers sometime later. The company confirmed to Inverse that both the TQi-GT and RQi-GT will be available to American buyers in that timeframe.

One of the major stumbling blocks could be the ongoing trade dispute between China and the United States. In the announcement small print, the company notes that its expected starting prices around mid-$2,000 “may fluctuate” due to a myriad of factors, including “import tariffs on Chinese goods.”

Update 1/8 5 a.m. Eastern time: An earlier version of this story listed the RQi-GT’s battery storage as 6.5 kilowatt-hours and the TQi-GT’s range as 80 miles. It has now been updated to reflect Niu’s revised specifications.