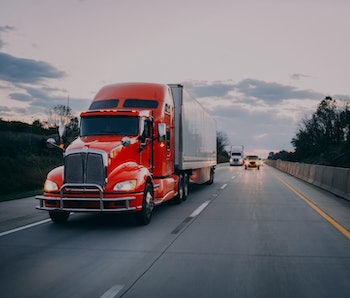 Transportation vehicles, like semi-trucks and cargo ships, are some of the biggest offenders when it comes to CO2 emissions. But scientists have now devised a plan to reduce those emissions by 90 percent by transforming emissions from these vehicles back into liquid fuel.

In 2016 emissions from transportation alone accounted for 28 percent of total CO2 emissions in the U.S., according to the EPA. As our global temperature inches closer to the warming point of no-return (2 degrees Celsius about pre-industrial measurements,) finding a solution to this growing problem is paramount. While solutions like plant-based biofuel and electric vehicles standout as attractive options, they face serious technological and logistical drawbacks. A new study has proposed a way to reuse CO2 emissions as soon as they’re created.

Instead of designing a new energy technology, a study published last week in the journal Frontiers in Energy Research, suggests finding ways to improve the system we already have. The team compared three different approaches to capturing and reusing the CO2 emitted during transportation, including CO2 compression and CO2 liquifying. The team determined that liquifying the CO2 would have the greatest impact, potentially decreasing transportation emissions from these types of vehicles by 90 percent.

The process would work by capturing emitted CO2 from the vehicles’ exhaust pipe and cooling it down before passing it through a specially designed filter to separate the CO2 from other gases like nitrogen and oxygen. To release the CO2 the special filter is reheated using energy from the vehicle and transformed into liquid fuel that can be stored in a 2-meter storage chamber on top of the vehicle. From there, the liquid fuel can be taken to a fueling station to be reused.

However, the researchers of this study say that their current design is too large to be implemented on smaller vehicles like cars. So, for now, the focus remains or larger polluters like trucks and ships.

But, not everyone is so fired up about carbon capture. A big complaint is that it doesn’t create enough incentives for polluting companies to change their ways. If large cargo boats can continue pumping out CO2 with little to no consequences, then why would they ever make a change toward more renewable resources? Additionally, by enabling energy businesses like these to continue exhibiting bad behavior, it puts more money in their pockets while still putting the public at risk.

However, there is also something to be said about how actionable this kind of carbon capture approach is today. In a recent study focused on another form of carbon capture, researchers said that these kinds of solutions are actionable today while designing super-efficient electric vehicles is not.

As with many big problems, a compromise is probably the best course of action. And the study authors write that their approach is still several years off regardless, so there’s plenty of time to do so.

In order to reduce the CO2 emissions in the transportation sector, one can electrify the vehicle, switch to biofuel, or capture and store CO2 on board. In this study, integration of an on board CO2 capture and storage unit with an internal combustion engine has been proposed. The technology can be applied for various internal combustion or Stirling engines with targeted applications in the transportation sector. Truck transport for goods delivery is used as an example for on board CO2 capture and storage system design. The investigated system integrates a temperature swing adsorption system for CO2 capture with a turbo-compressor system to compress and liquefy the captured CO2 using the waste heat of the exhaust gases of the engine. Energy and exergy analyses of the proposed CO2 captured system are studied in details. The CO2 capture system for engine exhaust stream (car, truck, bus, ship, or train) can capture 90% of the emitted CO2, without any energy penalty. This system can be integrated into overall mobility system (fuel-engine-CO2-fuel), where captured CO2 can be recycled as conventional liquid or gaseous fuels produced from renewable energy sources.