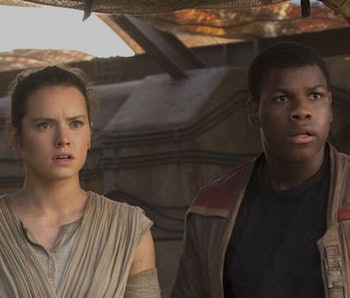 One of the biggest mysteries left by Star Wars: The Rise of Skywalker involved Finn’s message to Rey, which was interrupted by a mouthful of sand and never revisited. Fans have speculated that, while facing possible death by quicksand, Finn was about to tell Rey he loved her. Here at Inverse, it was deduced that Finn was trying to tell her something entirely different, and it turns out Episode IX director J.J. Abrams agrees.

Warning! Spoilers ahead for Star Wars: The Rise of Skywalker.

The Rise of Skywalker reunited the trio of Rey, Finn, and Poe and sent them gallivanting on an adventure across the galaxy. While Rey struggled with the burden of being Emperor Palpatine’s granddaughter and the pull of the Dark side, Finn assured her that she wasn’t alone. In the midst of being swallowed by a sinking pit on Pasaana, however, Finn’s status as loyal friend was brought into question.

Believing he would die, Finn says, “Rey! I never told you—” When Rey later asks him what he meant to say, Finn dismisses it and says he’ll tell her later in private. Finn’s crush on Rey has been well-documented and was even brought up in a deleted scene from The Last Jedi.

With that in mind, this led some fans to believe he was about to declare his love for his best friend. However, J.J. Abrams quickly squashed that speculation during a screening and Q&A for Rise of Skywalker.

According to Twitter user ar1aster, Abrams seemingly confirmed what Finn’s words to Rey actually were. Was Finn about to profess his love or did he simply need her to know he was Force sensitive? Abrams confirmed the latter as true. Sounds pretty cut and dry, but there’s more. Another Twitter user in attendance elaborated on Abrams’ words, suggesting that the director never really answered the question and kept it rather vague.

“What do YOU think?” Abrams asked in response to the question. He then went on to offer his own interpretation, which was that Finn wanted Rey to know he was Force sensitive. And there you have it. It’s important to note that an interpretation is not necessarily a confirmation and, per user AweMagic, “JJ phrased his answer in a way where it could mean different things to different people.”

It does seem strange that Finn’s last words to Rey would be about his Force sensitivity, but Abrams’ admission was backed up by John Boyega, who tweeted to confirm that, no, Finn wasn’t in love with Rey.

It’s possible Abrams left it open-ended precisely to fuel fan speculation. It’s also possible he didn’t quite know the answer himself and that’s why Finn’s interrupted reveal was never revisited. That said, it certainly seems clear that Finn wasn’t going to announce his undying love for Rey.

This is backed up by the prequel novel, Resistance Reborn, which confirms Finn and Rey as “just friends,” so that’s off the table. Fans might spend the next few years speculating, but Abrams’ response is as good a confirmation as any.

Star Wars: The Rise of Skywalker is currently playing in theaters.