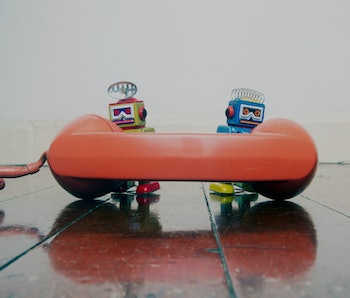 Everyone hates robocalls, including Congress. The Senate just unanimously passed a bill that will help decrease the number of robocalls we all receive that had been passed by the House earlier this month. All that’s left is for President Trump to sign the bill, and he is expected to do so before the end of the year.

You wouldn’t think Congress would be thinking about anything but impeachment right now, but the problem only grown in recent years. A new report claims Americans received over 26 billion robocalls in 2018, and this year that number is projected to go up to around 55 billion. The problem isn’t going to get any better until new laws are enacted and enforced.

Rep. Mike Doyle (D-Pa.) has claimed the law, known as Pallone-Thune Telephone Robocall Abuse Criminal Enforcement and Deterrence (TRACED) Act, named after its sponsors in the House and Senate, Rep. Frank Pallone Jr. (D-N.J.) and Sen. John Thune (R-S.D.), could be signed within a week.

The TRACED Act puts the onus on phone companies to block robocalls for their customers. It also emboldens government regulators and the Department of Justice to go after the people who are behind these robocalls. This could go along way toward getting us to a point where folks are willing to pick up phone calls.

Unfortunately, the new bill won’t completely stop robocalls from happening. It’s not easy for the phone companies to detect every robocall, as the technology that is being developed to help spammers evade detection is always advancing, and the phone companies definitely don’t want to accidentally start blocking legitimate calls.

Twelve carriers, including AT&T and Verizon, pledged to work on ending the robocall problem in August. These companies didn’t offer a whole lot of details as to how they will do this, but one technology we know they’re looking at would cryptographically sign everyone’s phone numbers. It’s called STIR/SHAKEN, and it would give your phone number a digital signature that the carrier can instantaneously check before routing a call through.

That will help stop robocalls that utilize “spoofing,” which is when a robocall uses a fake number to reach you. You’ll often notice a robocall is coming from a number that has the same area code as your number, and that’s because the robocall is not using a legitimate phone number. They’re simply trying to increase the likelihood that you’ll pick up the phone by using your area code.

The STIR/SHAKEN system won’t be able to root out robocalls that are done using legitimate phone numbers, but developers are working on other technological fixes to this problem.

See also: FTC: This Is the Most Important Thing to Avoid When You Get a Robocall

Unfortunately, there’s a lot of money in the robocall industry. A report from earlier this month found 1 in 6 Americans is the victim of a phone scam, and a large portion of those phone scams are done with robocalls. Americans lost over $10 billion to phone scams just last year. I think most of us have received the one about our social security number being “suspended.”