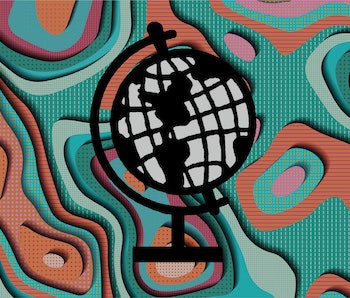 Between 100 and 120 million years ago, an ancient slice of land collided with what is now Europe. The collision occurred at speeds of no more than 3 to 4 centimeters per year. In that slow, painful process, the majority of that lost continent was driven into Earth’s mantle. But while the continent itself is lost to the ages, the remnants of it can still be seen today — as chunks of mountain belts strewn across the Mediterranean region.

In September 2019, scientists announced the existence of this ancient continent in the journal Gondwana Research. They also gave it a name — Greater Adria.

Signs of Greater Adria, which was once the size of Greenland, are peppered across Eurasia, from Spain to Iran. For at least a decade, scientists suspected that evidence of Greater Adria was mixed up with the geology of Europe. To find the lost continent, they investigated Europe’s mountain chains, examining rocks and taking note of the orientation of minuscule magnetic minerals.

These magnetic minerals were formed by primeval bacteria, and the bacteria make the magnetic particles in order to orient themselves to Earth’s magnetic field. Eventually, mineral-filled sediment turns into rocks, creating a record of orientation. In the study, the researchers reveal that some of these rocks — rocks that would eventually prove to be bits of Greater Adria — had gone through extremely large rotations.

The researchers took these on-the-ground measurements and used a software called GPlates to examine how Earth’s tectonic plates have moved over time — and how that movement pushes continents around.

By combining the simulation with the mineral analysis, the team mapped Greater Adria’s slow progression as it broke away from what’s now North Africa around 240 million years ago. Previously, both North Africa and Greater Adria were a part of the one-time supercontinent, Gondwana.

It would take it another 120 million years before Greater Adria began its crash, the debris from which can still be seen today — if you know where to look, that is.

As 2019 draws to a close, Inverse is revisiting the year’s 20 most incredible stories about our planet. Some are gross, some are fascinating, and others are truly incredible. This has been #12. Read the original article here.

More like this
Science
5.11.2022 11:00 PM
Look: Missing 19th century platypus and echidna specimens discovered in museum storage
By Jennifer Walter
Science
5.14.2022 7:00 PM
Why scientists think physics could be in for a reckoning
By Roger Jones and The Conversation
Science
5.10.2022 1:00 PM
Scientists rank the 8 best movie time machines of all time
By Becca Caddy
Share: