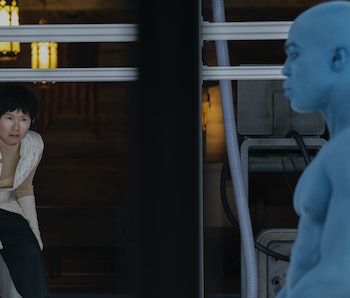 HBO’s Watchmen arrived with a bang at the end of 2019 with a story we’ll no doubt continue to unpack well into 2020. Created by Damon Lindelof and based on the 1986-87 DC Comics series of the same name written by Alan Moore and illustrated by Dave Gibbons, the show picks up decades after the original comics ended, transforming this Cold War-era story into a reflection of white supremacy and its influence on politics in America today.

Even though we don’t have the official word on Watchmen Season 2 getting greenlit, there is still plenty of information available to give us a sense of what could happen in a new season. With this in mind, let’s take a look at the logistics of a second Watchmen season, including how it could happen, who might return from the Season 1 cast, and when a Season 2 release date could arrive.

This should be obvious, but spoilers ahead for Watchmen Season 1.

Has Watchmen been renewed for Season 2?

Not yet, but it’s essential to remember Watchmen was never originally made with the intention for it to last longer than one season. From the very beginning, Damon Lindelof has maintained Watchmen was envisioned as a standalone limited series and, as such, the story he meant to tell was going to feel like a complete story.

With Season 1 in the bag and tons of critical acclaim as well as fan praise swarming the series, it’s very possible HBO could opt to renew for Season 2. But as of late December 2019, it’s still a waiting game.

Is Damon Lindelof coming back for Watchmen Season 2?

This is an even trickier question to answer than the previous one. Lindelof has been extremely coy about whether he would return in any capacity for Watchmen Season 2. Speaking with Variety in an interview posted just after the Season 1 finale, Lindelof mentioned his vague interest in the idea of returning without actually confirming he’s fully on-board for it.

“Right now the space that HBO is in and that I’m in is we’re asking the question, ‘Should there be another season of Watchmen?’” Lindelof told Variety, continuing, “And if there should be another season, what would it be? I’m not saying I don’t want to do it, or it shouldn’t exist. I’m just saying, ‘Boy, every idea that I had went into this season of Watchmen.’ I’m going to put up my antenna, see if it’s receiving anything. If it’s not receiving anything in a reasonable period of time — and I’ll just say off the top of my head, it feels completely and totally arbitrary, but like a couple of months doesn’t feel unreasonable, you know, January, February, maybe March — then I think we move on to your question, which is, if not me, then who?”

If Watchmen did, in fact, score a Season 2, it’s quite possible we won’t see it materialize until at least 2021. The high-concept series feels aligned with another big HBO series, Westworld, in terms of its scope, storytelling, and craftsmanship (also hard to ignore these two are based on popular movies and books, but I digress).

Even if HBO greenlit Watchmen Season 2 before the end of 2019, the prestige nature of the series should have you prepared for a 2021 premiere date because it will take some time to get through the production process. And that’s assuming Lindelof (or someone else) can come up with a good idea for the plot.

Is there a trailer for Watchmen Season 2?

There is no trailer for Watchmen Season 2 because it’s December 2019 and Season 2 doesn’t exist yet. However, it might exist in 2020 or 2021, but I haven’t yet consumed the egg containing Doctor Manhattan’s powers which would allow me to share the trailer with you. Sorry, fam.

Which Watchmen cast members will come back for Season 2?

None of the Watchmen cast has officially announced whether they’re signed on for a Season 2 (should it happen), so we can’t confirm it nor could we proceed to guess what would happen in Season 2 based on who’s coming back.

How did Watchmen Season 1 end?

The Watchmen Season 1 finale was literally and figuratively explosive, with lots of loops closed as new ones opened and the episode ultimately capped by a meaning-laden end credits song that had us scratching our heads.

Basically, everyone wanted to be blue. Senator Joe Keene, Jr. and Lady Trieu had their own respective reasons for wanting to capture and absorb Doctor Manhattan’s powers. Keene Jr. was a gross racist who, I’m guessing, wanted Doc’s powers to enact some gross racist atrocities on people of color. Meanwhile, Trieu said she wanted the powers to make the world a better place but was more likely motivated by selfish ambition for power and probably wouldn’t have used those powers for good.

In the end, it was Angela who was the rightful heir to Doctor Manhattan’s powers. After his death, Angela recalled her late husband’s words about being able to transfer his powers into organic matter along with the memory of their fight while he made pancakes wherein she ended up smashing all but one important egg. Angela ended up going out to the pool (as Manhattan had instructed her to do before his death) and eating the egg, which presumably contained his powers.

Additionally, we learned Lady Trieu was Adrian Veidt’s daughter. Despite their contentious relationship, we saw that Veidt and his progeny had a serious bit of comeuppance for their shared trait of cold, calculated intelligence. While Trieu was killed by the machine meant to transfer Manhattan’s powers into her body, Laurie Blake and Wade Tillman ended up arresting Veidt for his orchestration of the fake inter-dimensional squid attack in the late ‘80s.

What is the plot of Watchmen Season 2?

We don’t know the plot of Watchmen Season 2 but that’s only because the show hasn’t been renewed yet. One thing I hope we get in Watchmen Season 2: Vindication for Lube Man, who was revealed to be Agent Dale Petey via a very stern and 100% real memo from Petey’s boss at the FBI (via Peteypedia). The Silver Surfer analogue deserves lots more screentime than he was given in Season 1 and needs some screentime ASAP.

In all seriousness (although I am hella serious about #MoreLubeMan2021), Season 2 could go in a myriad of directions. If Season 2 were to carry on the story it set up in Season 1, the focus could be turned to the Earth trial of Adrian Veidt for his faked squid attack and the rise of Angela Abar as Doctor Manhattan II. There could also be an exploration into the future of vigilantism and its legitimacy in America as well as the fallout of the white supremacist group Cyclops’ infiltration of the Tulsa police department.

Or, Season 2 has the option to take a more anthological approach to Watchmen while keeping up Lindelof’s intentions to carry on the story initially set down in Moore’s Watchmen comics. If this were to happen, Watchmen could bring in an entirely new set of characters existing within the alternate timeline of this world and with full knowledge of the events of Season 1 but living out a new story.

Did someone say… Nite Owl?

How can I watch Watchmen Season 2?

If Watchmen does, in fact, return for Season 2 then you’ll be able to watch it the same way you watched Season 1: on HBO. And if you, like me, love to re-watch episodes, you’ll want to make sure you have a subscription to HBO Go or HBO Now so you can re-binge Season 1 and then keep up with Season 2 as it goes along.