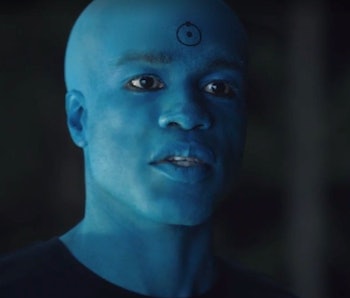 The Watchmen season (and likely series) finale answered almost all our lingering questions. We finally know what Lady Trieu was planning, what Adrian Veidt’s whole deal was, and whether the Seventh Cavalry succeeds. But Episode 9 of the HBO show also ends on a pretty huge cliffhanger, leaving it to viewers to decide what happens next. That is unless the familiar song that plays over the closing credits holds any major clues.

If you’re here just to find out what that Watchmen credits song was, the answer is I Am the Walrus by The Beatles (this was a cover), but if you’re wondering what it all means, well, stick around.

Warning! Huge spoilers for Watchmen ahead.

So what exactly happens at the end of Watchmen? After Doctor Manhattan dies, Angela Abar goes home to clean up the eggs she angrily threw on the ground in Episode 8. At that moment, she remembers the night when she first met Manhattan and he explained how he could transfer his powers to another human via some “organic material” that they would then eat. Like … an egg. (Need a refresher on that scene? Read our detailed breakdown of what it means.)

Reminded of that old conversation, Angela reaches for the carton and finds one unbroken egg. She picks it up, walks outside, eats it raw, and steps out over her swimming pool. But before we can see if she’s inherited Doctor Manhattan’s powers (including the ability to walk on water) the season ends, the credits begin, and the lyrics of John Lennon began to play.

How “I Am the Walrus” explains the Watchmen finale

Here’s one relevant section of the lyrics:

I am the egg man

They are the egg men

I am the walrus

Look, I didn’t say it made a lot of sense, but The Beatles are talking about eggs and so is Watchmen.

You can also speculate the Angela is “the egg man.” Not only does she eat an egg that maybe gives her superpowers, but her character has had a connection to eggs since the very beginning. The first time we see her, she’s cracking eggs for a presentation at her kid’s school. The first words she says are “egg whites.”

Also worth noting, Watchmen Episode 9’s official title is “See How They Fly,” which is another lyric from the same song. So clearly, “I Am the Walrus” is more than just a cool cover, it means something.

The true meaning of “I Am the Walrus”

Over the years, John Lennon offered several different explanations for the bizarre lyrics in “I Am the Walrus,” but the recurring theme seems to be that this song doesn’t mean anything at all.

In the documentary Composing the Beatles Songbook, he says he made the song purposefully confusing to mess with fans and scholars who would overanalyze everything he wrote. This was allegedly inspired by a letter Lennon received a letter from a student explaining that their teacher had the class analyze Beatles songs as part of their English studies.

So if “I Am the Walrus” doesn’t mean anything and was written specifically to mess with fans searching for meaning in its lyrics, what does that say about Watchmen. Maybe showrunner Damon Lindelof is trying to tell us not to look to deeply into things.

After all, there’s not always a bigger meaning. Sometimes, an egg is just an egg.

Watchmen is available on HBO.

More like this
Culture
Jan. 31, 2023
Lost Jumped the Shark by Breaking Its Most Important Rule
By Jake Kleinman
Entertainment
Feb. 3, 2023
Knock at the Cabin's Ending is Shyamalan's Most Surprising Twist Yet
By Eric Francisco
Entertainment
17 hours ago
The Last of Us Episode 4 trailer teases the entrance of Melanie Lynskey’s character
By Claire Fox
LEARN SOMETHING NEW EVERY DAY.
Share: