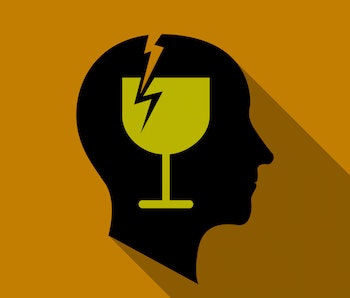 While the novelty of binge-drinking in a basement can wane as teens transition into young adulthood, those early drunken moments stick around as physical traces in the brain. Thanks to the brain scans of 726 teenagers entering their binge-drinking phase, new research also shows that early drinking behavior lingers in another way — in this case, affecting the way that people behave years after their first drink.

These brain scans show that drinking alcohol during adolescence is related to accelerated declines in gray matter in the brain. Gray matter is one type of brain tissue and is typically found around the brain’s surface. This analysis suggests that drinking causes gray matter to atrophy most aggressively in two regions: the left posterior temporal cortex a region towards the back of the brain, and the left prefrontal cortex.

This study was published Wednesday in the journal JAMA Psychiatry.

As teens age, gray matter volume naturally declines, but density of that tissue appears to increase in tandem. Alcohol, though, has historically been associated with accelerated gray volume decline in adolescents.

Gabriel Robert, this study’s first author, tells Inverse that this study lends some support that alcohol can be “neurotoxic” but it also shows how that decline could play out in behavior, and suggests that the effects are far more nuanced than one might think.

Specifically, he argues that gray matter atrophy might be a “contributing factor to the escalation of alcohol intoxication.” In other words, gray matter declines could drive teens to get drunk more often.

This study is based on brain scans and the drinking behavior of 726 adolescents from several cities across Europe. These teens generally weren’t heavy drinkers, says Robert — 117 of them had only gotten drunk twice in their lives. The team asked those teens about their drinking habits when they were 14, 16, and 19, and took brain scans twice, once when they were 14 and again at age 19.

Taken together, the analysis shows that as gray matter declined in the teen’s brains, drinking frequency rose. While the fact that teens got drunk more often when they were older may not be especially surprising, their statistical analysis suggests that it was the gray matter declines that partially drove this drinking behavior.

For example, adolescent girls from London, the group who saw the quickest declines in gray matter over the study period, showed the greatest increase in drunkenness (which means they got drunk more often.) By comparison teenage boys from Paris, the group that saw their gray matter decline the slowest didn’t get drunk as often.

This suggests that there is a relationship between gray matter atrophy and how often teens get drunk — which hints at the consequences of gray matter declines that other studies have shown before. But Robert says we should look at this relationship carefully.

“The regular interpretation of ‘alcohol drinking during adolescence destroys the developing brain and we can see it on the MRI’ is too simplistic and does not reflect the complexity of the brain,” he says.

The real question is: What do these changes in the brain mean for behavior? It’s here that the study offers a hypothesis — arguing that declining brain matter may also affect these young drinker’s personalities.

Ultimately, the team found that there were strong relationships between personality traits like impulsivity and drunkenness. However, they were only able to pinpoint this result in one group — the boys.

“Here, we show that impulsivity trait at 14 years-old is associated with a future increase of alcohol intoxication between 14 and 19 years old, which was particularly true among boys, even in healthy adolescents,” Robert says.

Ultimately, gray matter volume showed no statistically significant relationship to impulsiveness. Though the team does suggest that for boys, in particular, impulsivity could represent an alternative pathway that leads to more drinking in the future.

It’s complicated but a result worth examining further: Robert explains that impulsivity is regularly associated with addiction disorders, so tracing the connection between impulsivity and alcohol in the brain could yield further insight that this study doesn’t touch on.

For girls, though, Robert suggests that gray matter atrophy could have more of a direct effect on whether or not future drinking happens. There’s still more to understand — but it’s also one more piece of evidence showing that when you drink, your brain changes. That’s especially true if you’re a teen.

Main Outcomes and Measures: Increases in drunkenness frequency were measured by latent growth modeling, a voxelwise hierarchical linear model was used to observe gray matter volume, and tensor-based morphometry was used for gray matter development. The hypotheses were formulated before the data analyses.

Conclusions and Relevance: This study found that gray matter development and impulsivity were associated with increased frequency of drunkenness by sex. These results suggest that neurotoxicity-related gray matter atrophy should be interpreted with caution.