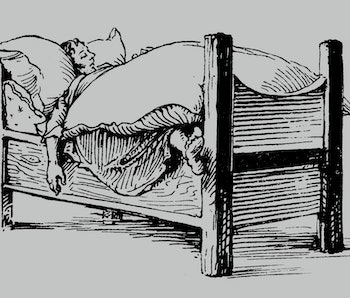 The time you spend sleeping shapes your life awake — and scores of studies show sleep promotes a healthier brain, heart, and immune system. But too much of a good thing may lead to an uptick in a person’s risk of stroke, new research suggests.

The data reveal three startling associations: People who consistently sleep more than 9 hours per night, take naps longer than an hour and half, or who report low-quality sleep have a higher risk of having a stroke.

Oversleeping, long naps, and disrupted sleep could lead to an 85 percent increased risk of stroke.

The paper was published this week in the journal Neurology.

The study involved 31,750 people in China with an average age of 62 who had no history of stroke or any other major health problems. Study participants filled out a questionnaire detailing how long they slept each night, their napping habits during the day, and how restful their sleep was. Then, over an average of six years, the researchers tracked who had a stroke, and, if so, what type.

Most people in the study slept moderately, but a significant portion slept long hours: 8 percent of people regularly took naps over an hour and a half, while 24 percent slept for more than nine hours a night.

How much is too much?

People who took long naps of more than 90 minutes were 25 percent more likely to later have a stroke than people who took short naps (up to an hour).

For those who enjoyed long naps and more than nine hours of sleep a night, the risk of stroke skyrocketed: this group was 85 percent more likely to have a stroke than people who were moderate sleepers and nappers.

The findings suggest a sleep schedule sweet spot: Less than nine hours of restful sleep a night, with the occasional short nap at midday thrown in.

The spike in risk of stroke isn’t necessarily caused by the extra zzz’s. Xiaomin Zhang, study author and researcher at Huazhong University of Science and Technology, speculates that other lifestyle factors may be at play.

“Long napping and sleeping may suggest an overall inactive lifestyle, which is also related to increased risk of stroke,” Zhang tells Inverse.

This inactivity may ultimately result in strokes, which kill an estimated 140,000 Americans every year.

People who reported poor quality sleep were also 29 percent more likely to later have a stroke than people who said their sleep quality was good. Disrupted sleep may lead people to feel over-tired, which can ultimately affect their mental and physical well-being.

Surprisingly, people who slept less than seven hours a night — who might deal with sleep deficiency, apnea, or insomnia — weren’t more likely to have a stroke than those in the 7-8 hour sleep sweet spot.

More research is needed to parse out exactly what’s driving the association.

“These results highlight the importance of moderate napping and sleeping duration and maintaining good sleep quality, especially in middle-age and older adults,” Zhang said in a statement.

Objective: To investigate the associations of sleep duration, midday napping, sleep quality, and change in sleep duration with risk of incident stroke and stroke subtypes.

Methods: Among 31,750 participants aged 61.7 years on average at baseline from the Dongfeng-Tongji cohort, we used Cox regression models to estimate hazard ratios (HRs) and 95% confidence intervals (CIs) for incident stroke.

More like this
Mind and Body
5.3.2022 10:45 AM
More than half of Americans have had Covid-19 — here's how to tell if you are one of them
By Katie MacBride
Science
5.9.2022 10:00 AM
Here’s the optimal amount of sleep for good mental health, according to a new study
By Barbara Jacquelyn Sahakian, Christelle Langley, Jianfeng Feng and Wei Cheng
Mind and Body
16 hours ago
Lemon water won’t detox or energize you — but here’s what it can do
By Evangeline Mantzioris and The Conversation
Related Tags
Share: