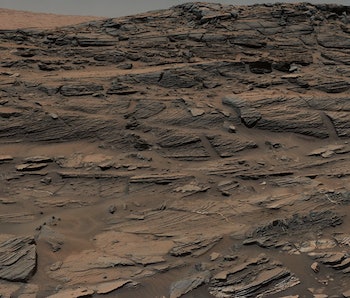 Whether or not Mars may once have hosted life on its now dry, desolate surface is one of the key questions scientists are trying to answer today. But in order for there to be life, there must also have been water.

In March 2019, scientists took a step closer to answering that question: They had found the first geological evidence of a groundwater network system on the Red Planet.

“On Mars we found geological evidence of water related environments that led us to infer the presence of a planetwide groundwater system, possibly interconnected,” Francesco Salese, a planetary geologist at Utrecht University in the Netherlands and lead author of the study told Inverse at the time.

Groundwater is moisture within the soil and rocks beneath a planet’s surface. On Earth, it makes up the planet’s largest liquid fresh water reservoir. Scientists had previously predicted that groundwater might exist on Mars, but the new study was the first to detect it in the geological makeup of the planet.

The Red Planet’s groundwater system stretches across the entire planet. That’s because Mars has one tectonic plate that could connect different water basins together.

The team of researchers looked at 24 craters in Mar’s northern hemisphere using photos snapped by NASA’s Mars Reconnaissance Orbiter and the European Space Agency’s Mars Express orbiter. Near the floor of the craters, they found valleys, channels, terraces, and deposits of sediment. These features could only have been left behind by groundwater rising and falling, which would have slowly eroded the soil to create these characteristics.

In many of the craters, the features appeared at roughly the same level — a depth of between 4,000 and 4,500 meters below the predicted Martian ‘sea-level,’ suggesting that the craters once were interconnected vessels.

Finding water on Mars is a good indication that the planet once hosted life during its 4.5 billion years of existence. Although it is now dry and has a thin atmosphere made up mostly of carbon dioxide, scientists believe that Mars may have been habitable at some point in time before it lost its atmosphere. NASA’s 2020 Mars mission could provide more clues as to whether — and what — life existed there in the past.

As 2019 draws to a close, Inverse is counting down our top 20 space stories from 2019. You can read them all here. Some are wild, some are mind-boggling, and others will change how you think about the universe. This is #11. You can read the original story here.