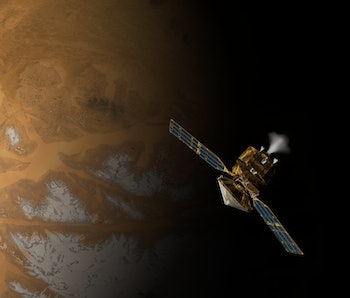 Ten years ago today, the Mars Reconnaissance Orbiter hitched a ride on a rocket from Cape Canaveral, bound for the Red Planet. It’s been orbiting Mars ever since, investigating the planet’s weather, strange landforms, and watery history. Over the past decade, the MRO has sent home more data about the planet than the six other active Mars missions combined.

Here is what the MRO has found so far:

Back in 2013, the MRO found basalt sand dunes, like the ones around the Hawaiian volcanoes, forming rings around Mars’ north pole. It gets so cold in the winters that 30 percent of the carbon dioxide in the atmosphere freezes solid — forming dry ice.

In early 2014, photos of the slopes of Mars’ Newton Basin crater, taken over several Martian seasons, revealed dark features in the bedrock that formed and faded with the seasons. Taking latitude and temperature into account, scientists think these mysterious patterns can only be formed by one thing: liquid water.

Part of the MRO’s job was to keep tabs on its pals on Mars. Here’s a shot it snapped of the NASA Curiosity Mars Rover, launched in 2012, in the “Artist’s Valley” on the lower slope of Mount Sharp. The Curiosity Rover made news recently for snapping a photo that looked to many like a “ghost woman” on Mars.

Comet Sliding Spring came from the Oort Cloud ringing our solar system. It passed close to Mars — so close that scientists initially thought they might collide — in October 2014. The MRO was there to catch it fly by.

Back in 2014, the MRO snapped this photo of the Opportunity Rover (red arrow), hanging out in the “Murray Ridge” section of Endeavour Crater. The MRO was programmed to snap this after a previous photo had shown a rock near Opportunity — dubbed “Pinnacle Island” (honestly, who names these things?) — that seemed to have mysteriously appeared. This photo was meant to make sure the rock wasn’t leftover debris from a nearby impact (it wasn’t). The blue arrows point to tracks Opportunity previously left behind.

The UK’s Beagle 2 was supposed to get to Mars on December 25, 2003, but it never phoned home to Earth. Earlier this year, the mystery was solved thanks to the MRO, which spotted the half-deployed Beagle 2 in Mars’ Isidis Planitia.

In 2012, the MRO caught this 12-mile-high dust devil sweeping across the Amazonis Planitia region of Northern Mars. Its plume is about the same width as three-quarters of a football field.

The MRO snapped this shot of this super-fresh (geologically speaking) crater in June 2015. Its sharp rim and well-preserved ejecta suggests the impact happened fairly recently.

Just south of Coprates Chasma, the MRO used its HiRISE to snap evidence of an unexpected brown substance: clay. It serves as evidence that liquid water used to exist here — enough to weather the plains into clay deposits.