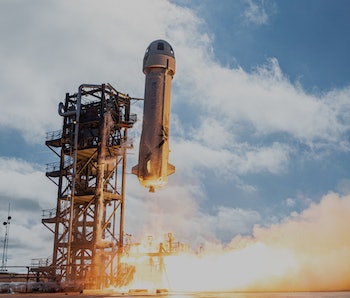 Lift off! Blue Origin successfully launched New Shepard on December 11, the ninth commercial payload mission for the vehicle and a record sixth time the company has flown the same booster.

Jeff Bezos’ space-faring firm may grab fewer headlines than Elon Musk’s SpaceX, but the Amazon CEO’s company is quietly laying the groundwork for new space-bound infrastructure. Future plans include a crewed mission, a lunar landing supported by other firms and NASA, and a far-flung goal to support one billion humans in floating space cities.

The New Shepard “NS-12” launch was a small step toward these goals. At 12:53 p.m. Eastern time, the rocket lifted off from the company’s West Texas facility, before landing 10 minutes and 16 seconds later.

This was the 12th New Shepard mission, but where the previous booster flew for only five missions, this one has now beat that record with its sixth ascent. The rocket flew the firm’s 100th customer as part of the mission, while also sending up thousands of postcards from students via the company’s Club for the Future nonprofit.

As Blue Origin continues to move toward getting New Shepard ready for human flight, here’s what comes next.

The company, whose headquarters are in Kent, Washington state, a short drive to Amazon’s Seattle base, has big plans to reach its ambitious goals and further space technology. The big goal is to start sending humans into space.

The next step will likely be another uncrewed flight for New Shepard. In September 2019, the company told CNBC that it would fly the rocket at least two more times before putting people on board. NS-12 covers one of those launches, so the company will likely complete at least one more flight before moving onto humans.

This is a notable slip from its previous plans to send humans into space before the end of 2018. CEO Bob Smith told the publication that the delays are due to “the robustness of our entire system. It’s not one individual thing that’s driving [these delays]…it’s us being cautious and thorough with the total systems we need to verify.”

The plan is to use New Shepard to send six humans into space past the Karman line, around 62 miles above the Earth’s surface where space is generally agreed to start. They would float for around 10 minutes, enjoying views of the Earth through the capsule’s giant windows. They would then return to Earth. Pricing is still unclear.

Elsewhere on the company’s agenda, it’s set to compete against Northop Grumann, United Launch Alliance and SpaceX for two slots on the United States Air Force’s launch contracts. The two firms will be awarded contracts from 2020 to 2024 for launches running through to 2027. The Air Force is expected to start awarding contracts in mid-2020.

The company is expected to start launching its New Glenn rocket sometime later. Where New Shepard can only reach suborbital launches, New Glenn will be able to complete heavy orbital launches by lifting 99,208 pounds to low Earth orbit. It will measure around 22 feet in diameter and 269 to 311 feet in height.

Part of this project involves finishing the launch pad. The company will use a modified Launch Complex 36 pad at Cape Canaveral Air Force Station in Florida. Local news site Click Orlando claimed work is ongoing at the site in preparation to start launching New Glenn from the pad in early 2021.

Blue Origin is also set to continue working on the Blue Moon lunar lander unveiled in May 2019. This is designed to send 3.6 metric tons to the surface in its cargo form. An alternative stretchable design can carry 6.5 metric tons.

In October 2019, Blue Origin teamed up with Lockheed Martin, Northrop Grumman, and Draper. The goal is to help NASA reach its aim of landing a human on the moon again by 2024, a plan expected to put the first woman on the moon. Blue Moon is expected to serve as the lander for this project.

Beyond that, Blue Origin has an ambitious long-term vision of humans living in floating space cities. Each city would be designed to support different ecosystems, and their close proximity to Earth would make transportation simple. In a speech at the May 2019 event, Bezos declared that the choice was between “stasis and rationing” in a humanity confined to Earth, or “dynamism and growth” among the stars.