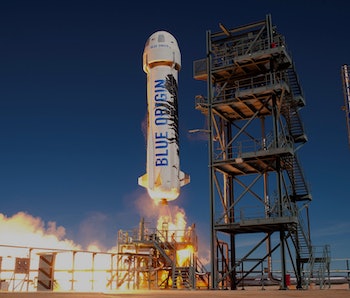 Sunday will mark the eighth test flight for Jeff Bezos’ aerospace company, Blue Origin. The company will launch its New Shepard spacecraft as part of its incremental process to develop sub-orbital spaceflight, which is different than what Elon Musk is doing with his company, SpaceX.

Sub-orbital spaceflight is when a spacecraft goes into space but does not reach the altitude where it can orbit Earth. It goes to the end of the atmosphere, or specifically, 100km (62 miles). Right at this distance above the planet is where people can experience weightlessness.

It was Theodore von Karman who formulated the idea of a certain altitude where the atmosphere was too thin for regular flight. Called the Karman line, 100km is approximately where the thermosphere starts and is considered the “edge of space.” It’s in this part of the Earth’s atmosphere where solar radiation gets absorbed and can reach temperatures 360 degrees Fahrenheit on regular days, but can go as high as 900 degrees when there’s a lot of solar activity.

Bezos founded Blue Origin in 2000 to develop private human access to space travel. The New Shepard space vehicle consists of a reusable rocket and a crew capsule designed for space tourism. It will travel at a speed faster than Mach 3 to reach the Karman line, then the rocket will detach from the capsule. As the rocket returns to the surface, the capsule will slowly descend to Earth via a parachute allowing passengers to experience a period of weightlessness and see the heavenly view at the edge of space.

New Shepard’s eighth test flight will happen at 8:45 a.m. Central from the company’s West Texas launch site. The livestream for the launch will start 15 minutes prior to launch and will be viewable on the Blue Origin website.

Amazon’s CEO is making headway in his race to space. While he’s not as far along as Musk, he is equal to, if not surpassing, the efforts by Virgin Galactic’s Richard Branson.