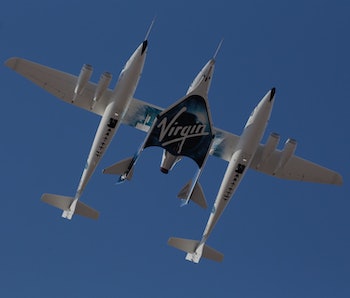 After years of downtime, Virgin Galactic is back in the space race. The spaceflight company took the next step in its plan for a space tourism business with a successful rocket test in the skies above California.

Virgin Galactic successfully launched its VSS Unity spaceship on Thursday. Piloted by Dave Mackay and Mark “Forger” Stucky, the ship’s rockets peaked at Mach 1.87 for 30 seconds above Mojave, California, after it reached 46,500 feet on its carrier aircraft, the VMS Eve. The ship flew to 84,271 feet before it began its re-entry and eventual safe landing. This marks the first rocket launch by the company since the fatal crash of SpaceShipTwo in 2014.

“[Virgin Galactic] back on track. Successful powered flight, Mach 1.6. Data review to come, then on to the next flight,” tweeted founder Richard Branson on Thursday. “Space feels tantalisingly close now.”

Branson started Virgin Galactic in 2004 with a lofty goal of heading to space in 2009. In 2005, he also co-founded The Spaceship Company, which would act as a sister manufacturing company to Virgin Galactic. It was October 31, 2014 when the company’s SpaceShipTwo craft, called the VSS Enterprise, crashed due to a premature deployment of the craft’s re-entry system, which killed on pilot and injured the other. Branson tweeted on Thursday saying the successful launch came “after two years of extensive ground and atmospheric testing.”

On its website, Virgin Galactic said the launch “generated valuable data on flight, motor, and vehicle performance which our engineers will be reviewing.” There is no date set for their next rocket test.

Last year, Branson said 2018 would be the year the company would send people into space, but he followed that up by saying he’s given the wrong date before. His plans for the company’s future include a space hotel floating above the earth.

More like this
Science
8.16.2022 6:00 PM
A new plasma-based technology could be crucial for living on Mars
By Doris Elín Urrutia
Science
8.12.2022 10:00 AM
45 years ago, the first Space Shuttle made history without going to space
By Allie Hutchison
Science
8.3.2022 8:56 PM
NASA confirms Artemis I launch date and previews upcoming milestones
By Kiona Smith
Share: