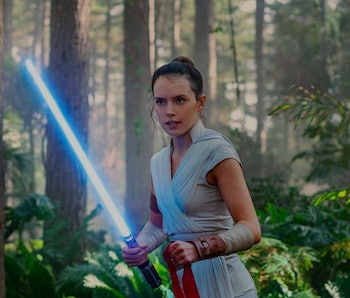 With Star Wars: The Rise of Skywalker fast approaching, Rey’s backstory remains one of the saga’s biggest unsolved mysteries. While director J.J. Abrams has confirmed that Rey’s origins will further be explored in Episode IX, a new interview with the director suggests the upcoming film won’t undo Rey’s origin story from The Last Jedi.

Possible spoilers and discussion of leaks ahead for Star Wars: The Rise of Skywalker.

If Kylo Ren is to be believed, Rey’s parents are nothing but “filthy junk traders.” However, a leak from Making Star Wars has claimed that her grandfather is none other than the villainous Emperor Palpatine. That particular bit of information has been divisive within the fandom, as it seemingly retcons The Last Jedi. Many fans had hoped that Rey’s unknown parentage meant anyone could be strong in the Force regardless of their bloodline.

In an interview with Premiere (via SlashFilm), Abrams seems to indicate that the Force isn’t actually specific to any bloodline or family. Is Abrams keeping Rey’s backstory intact in Episode IX? Here’s what he said:

It is an absolute mistake to say that you have to be related to a particular person or blood line to have power with the Force. Since I was a child, one of the most moving things for me was to know that anyone could be a Jedi.

Bloodlines have been incredibly important to the history of Star Wars thus far, but that doesn’t have to be the case going forward. While Abrams’ comments might debunk that Palpatine leak, it may confirm another MSW leak, which says Rey will take on the surname Skywalker at the end of Episode IX. If The Rise of Skywalker maintains that Rey is strong in the Force despite her bloodline, then it makes sense that she’d choose her own legacy.

This is in line with Lucasfilm head Kathleen Kennedy’s comments about the Force and its legacy. In short, she said that the Force is the “foundation” of Star Wars and heavily implied that it’s the Force, not the person wielding its power, that will be important to Episode IX and to the future of all Star Wars films. In any case, we won’t have to wait long to find out all the answers about Rey.