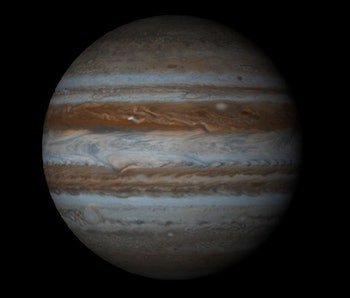 In August 2019, a small, stony meteor crashed into Jupiter, releasing an amount of energy equivalent to a the explosion of 240 kilotons of TNT. And luckily for scientists, the rare cosmic collision was caught on camera by amateur astronomer Ethan Chappel.

Chappel spotted the crash on August 7. In his video, the impact can be seen as a bright flash of light that appears for 1.5 seconds on the lower, left side of the gas giant. He later analyzed the footage using an open source software called DeTeCt.

What Chappel had found inspired a team of astronomers to further analyze the slow-motion video to determine the impact’s cause. They announced the results in September 2019: It was a small meteor of just 12 and 16 meters in diameter and weighing around 450 tons in mass.

But despite the meteor’s relatively diminutive size, the resulting flash was the second brightest ever observed coming from Jupiter.

“These detections are extremely rare because the impact flashes are faint, short and can be easily missed while observing the planets for hours,” Marc Delcroix, a French amateur astronomer and co-developer of DeTeCt, said in a statement.

Even though they are rare, Jupiter is a popular target for meteors like this one. “Most of these objects hit Jupiter without being spotted by observers on Earth. However, we now estimate 20-60 similar objects impact with Jupiter each year,” physicist Ricardo Hueso, who also developed the software DeTeCt, said in a statement. “Because of Jupiter’s large size and gravitational field this impact rate is ten thousand times larger than the impact rate of similar objects on Earth.”

As 2019 draws to a close, Inverse is counting down our top 20 space stories from 2019. You can read them all here. Some are wild, some are mind-boggling, and others will change how you think about the universe. This has been #13. You can read the original story here.