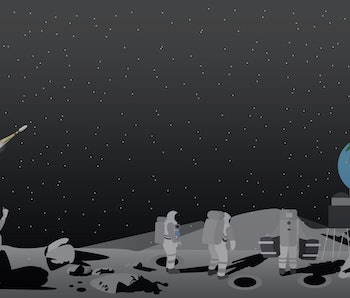 The past decade was a busy one for space exploration, especially for robotic rovers on the surface of Mars. But despite predictions from the likes of Elon Musk that human beings will start leaving their footprints on the red planet in the near future, Inverse instead predicts that space exploration in the next ten-years will return a little closer to home: the Moon.

Since the first successful moon landing in 1969, only twelve individual astronauts have walked on the moon’s surface, and NASA’s Apollo missions to collect moon rock samples and explore the lunar surface only lasted until 1972 as a result of waning public interest and a redistribution of public funds. But, NASA announced in 2017 its plans to return humans to the lunar surface in 2024 as part of the third leg of its Artemis program. This would be NASA’s first crewed lunar mission in over 50 years.

As NASA describes it, this third Artemis mission would really be a test-run for technology that may be used on future Mars missions to allow astronauts to construct dwellings, live and research on a non-Earth surface. The benefit of doing this on the moon first is that the astronauts would only be three days away from home if something went wrong. And NASA’s not the only space agency with this vision.

In 2013, China joined the now-dissolved Soviet Union and the U.S. as one of only three countries to successfully land an uncrewed mission on the lunar surface. In 2018, the People’s Republic revealed plans for its own lunar base at the first inaugural Morgan Stanley “Space Summit” in New York City. Representatives from the China National Space Administration (CNSA) said at the summit that the base would be built by 2030.

Beyond simply landing on the moon and testing out strategies for later Mars missions, there is fascinating science to be done on the lunar surface in the coming years, including lunar water and the largely unexplored “dark side” of the Moon.

Already in 2019 China’s Chang’e 4 lander touched down on the lunar surface and conducted the first-ever biological experiment on the moon (the sprouting of a cottonseed that quickly died, but still) and via its Yutu-2 rover has discovered a strange “gel-like” substance on the moon’s dark side.

Both CNSA and NASA have plans for new uncrewed science missions in 2020, NASA’s being a cubesat called Lunar Flashlight designed to scope out frozen water on the moon and CNSA’s a Chang’e 5 lander designed to return surface samples from previous missions to earth.

While planning for future Mars missions may see progress in this next decade, Inverse predicts that the actual action will be taking place on the Moon. There might be some crowing about this — former astronauts Buzz Aldrin and Michael Collins have both stated a preference for going to Mars directly. But once the missions start in earnest, even dissenters will realize the extent of our unfinished lunar business.

As 2019 draws to a close, Inverse is looking to the future. These are our 20 predictions for science and technology for the 2020s. Some are terrifying, some are fascinating, and others we can barely wait for. This has been #14. Read a related story here.