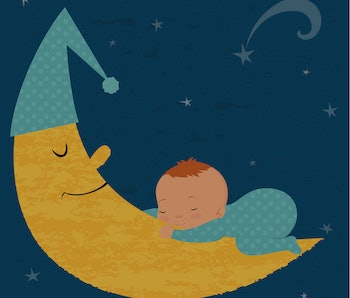 “We have been warned from an early stage that this could be a geopolitical playing ball,” scientist and entrepreneur Egbert Edelbroek tells Inverse. “China wants the first woman on the moon; Elon Musk wants the first human on Mars. Some country will be attracted to this achievement of having the first baby born in space.”

Edelbroek is one the founder’s of SpaceBorn United, a Dutch company that wants to enable the first space birth to take place in as little as 12 years.

President Trump wants to plant the U.S. flag on Mars by 2033, and with any such mission likely to be a one way trip, he better hope scientists have figured out have to create space babies before then. He’s not alone. Musk, the founder of SpaceX, has dreams of an entire city living and breathing on Mars. Without reckoning with the technical and ethical challenges of how to safely conceive and give birth in space, any Martian colony could be short-lived.

Despite this, developments in the field have increasingly fallen into the sphere of the private sector. “NASA’s interest in developmental biology [has gone] from a high priority to a very, very low priority,” says Jeffrey Alberts, Professor of Psychological and Brain Sciences at Indiana University.

For one, national space agencies struggle to justify spending taxpayers’ money on such risky endeavours. “It’s controversial, dealing with delicate babies and vulnerable pregnant women,” says Edelbroek, who is no stranger to controversy himself.

Like a company focused on rocketry or satellites, SpaceBorn United spells out its goal in clear terms: Safeguard human sperm and eggs, which the company calls “Seeds of Life,” in space by 2021 and “make conception in space feasible by 2023 and enable real human birth in space by 2028,” it says on its website.. There are three missions within this timeline: Ark, which will store reproductive cells on Earth and onboard a satellite, Lotus, which will focus on incubation, and finally Cradle, in which the company imagines a “24-36 hour mission” during which “a woman will give birth in low Earth orbit (at 250 miles altitude), accompanied by a trained world class medical team.”

But earlier this year, SpaceBorn United re-evaluated its business model so that it would no longer be majority funded by wealthy sperm and egg donors. These “seed” of these donors would have been safeguarded on a space satellite, protected in case of a catastrophe on Earth. A quarter of the samples were designated to be non-profit to “increase the ethnic diversity balance” onboard the Missions Ark.

“It felt wrong that that this would be a rich man’s toy. It was compromising the purity of our long term scientific goal,” says Edelbroek.

The first step for SpaceBorn United is the development of an incubator similar to that used in IVF clinics, which would shelter developing embryos from the hazards of outer space. Away from the protective shield of the Earth’s magnetic field, cosmic rays are spewed out by solar flares and rain down from the depths of the Milky Way. This is why astronauts in space see flashes of light when their eyes are closed, as the rays zip through.

Even in this hostile environment, sperm turns out to be hardier than you might expect. In 2017, research published by Sayaka Wakayama found that the DNA in mouse sperm stored on International Space Station for 9 months was delivered back to Earth with little damage. So little damage, in fact, that the sperm was used to give birth to several litters of healthy space pups. “Just like a tardigrade,” Wakayama says, referencing a tiny animal that can survive moderate space radiation and extremes of temperature.

Still, these findings would be of little comfort to a prospective mother giving birth in space who, along with her child, would face an increased risk of cancer. On top of that, there’s an array of uncomfortable, and sometimes life-threatening, health conditions that astronauts on the International Space Station suffer because they float in microgravity— from “space fever” to “puffy face” and “chicken legs”. Perhaps of most concern is a condition known as “space brain”, whereby fluid pools around the brain and squishes it.

These ailments are usually temporary, but for a human foetus developing in space, the changes to their brain and body may be far more fundamental. In the 1980s, the Soviet mission Kosmos 1514 placed pregnant mice onboard a satellite for five days. On their return to Earth, scientists found that the senses of some of these early space pups were blunted. When dropped upside-down inside a tank of water, the mice couldn’t right themselves and land on their feet— as your run-of-the-mill Earth mouse would. Other senses, however, were enhanced.

Growing in an environment where up and down doesn’t exist, mice developed novel brain architecture. Would the same happen to the children who form the first societies in space? “It’s a fantastic idea,” says Alberts noting how adaptive humans are to new environments, largely because our brains are so plastic when prodded with novel stimuli. “We’re going to be wired differently,” he says, speculating that space societies could even have “a different sense of yourself and sense of connection to other beings.”

Alberts calls this the “astroneurone”, and it raises ethical concerns that the first children who are carried in the womb and born in space could be considered “degenerate” by Earth-centric society. While Alberts acknowledge this possibility, he hopes “that people would see the chance for appreciating human potential and variation”.

From near-Earth orbits, to the Moon, to Mars, space is filled with unique environments. All of these might lead to the creation of humans with subtly different brains and bodies. But the question of who will form the first space societies, and the house the first children, ultimately comes down to politics.

SpaceBorn United’s U-turn on a business plan that would stock space primarily with the eggs and sperm of the wealthy is a warning sign that ethics isn’t always at the forefront of private space enterprise. “We think that the most important thing is that humanity gets to learn how to reproduce, even if that means it would not include too much of a united approach,” admits Edelbroek. “But that will definitely be preferable.”

Space exploration more broadly is still the domain of the very wealthy. A trip to the International Space Station as a tourist will set you back millions of dollars, while leading space companies Blue Origin and SpaceX are owned by multi-billionaires Jeff Bezos and Elon Musk. And as NASA turns its gaze to the Moon once again, it’s increasingly dependent on private companies to make that happen.

“I will be concerned if we do exactly the same thing we do on Earth in space, which is great income inequality,” Danielle Wood, Assistant Professor at the MIT Media Lab, who works on how to democratize space technologies, tells Inverse. Our current global economy also creates the perception that it’s OK for future space societies to be dominated by the wealthy, she says, but “justice implies that every human has equal access to space”.

Wood notes that this inequality, and the wealth of the world’s billionaires, rests on a system of resource extraction stretching back to the beginning of the slave trade in the 1400s. “Colonial mentality says that I can claim whatever I want, and use it up,” she says. Rather than racing to be the first country to plant a flag on Mars, or have the first babies in space, Wood suggests we embrace what she calls an “Antarctic mentality”, whereby space is shared and conserved for everyone— especially for science and cultural appreciation. “It’s more like parks rather than colonies,” she says.