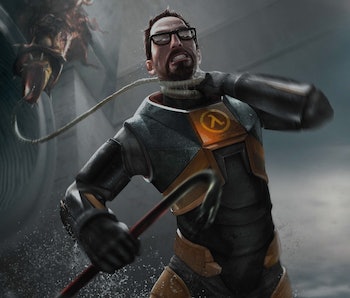 Valve has been silent about its critically acclaimed Half Life series for 12 years now. A batch of recently leaks and rumors suggests the company is poised to break that silence as early as this week. But the rumored announcement isn’t shaping up to be what fans have expected.

It won’t be Half-Life 3, arguably one of the most anticipated games of all time. Instead, the rumor claims Valve will announce a virtual reality game set in the same universe, titled Half-Life: Alyx. That’s a strong hint development on Half Life 3 may have been shelved for this VR title, which means the final entry of the series is still a long way off.

This information comes from a now-deleted, but widely circulated alleged transcript of an unpublished interview between Geoff Keighley, Valve developer Robin Walker, and an unnamed third Valve employee, which the transcript speculates could be co-founder Gabe Newell.

“March 2020, Half-Life: Alyx comin’ out”, says “Keighley” in the transcript, which then goes on to claim the game will December 12 at The Game Awards 2019 in Los Angeles. But a redditor claiming to have insider information says Valve might tease Half-Life: Alyx as early as this week.

Redditor /u/gameanon1996 wrote that a Valve source told them that an announcement or tease relating to this rumored Half-Life-based VR game is “very likely” taking place on Wednesday. The post also claims the upcoming title will be a “continuation of Episode 2,” with “a new game mechanic that wasn’t… explored in any game before.”

Valve is known for dropping cryptic teasers on Steam, its online games marketplace. Its recently released Valve Index VR headset was first revealed as a shadowy landing page on Steam’s website. So the Half-Life: Alyx teaser could be a simple banner Valve slaps onto Steam to stir up hype until the Game Awards.

A new Half-Life title could help boost Valve Index sales, plus the company said back in April that it would tease a “flagship” VR game in 2019. So while there’s been every reason to expect a big VR title from the company, it sadly means that a Half-Life 3 announcement slides further into the abyss.

Evidence is mounting that Half Life is finally coming back, but it’s not exactly what diehard fans have been dreaming of for nearly a decade.