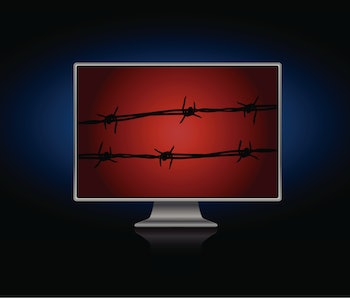 Countries like China, Iran and Russia are known for strictly censoring what their citizens can see on the internet. These authoritarian governments do this to control their people and protect those in power. It can be very difficult, and often dangerous, to try to get around this, but a new tool looks like it could be the best way to beat censorship in these kinds of oppressive countries.

Researchers at the University of Maryland have developed a kind of AI that they’ve named Geneva, which stands for “Genetic Evasion.” This AI uses a kind of machine learning to automatically detect bugs and gaps in a country’s censorship system so the user can view uncensored content.

Kevin Bock, a computer science Ph.D. student at UMD and lead author of the research, tells Inverse that this kind of machine learning is based on evolution.

“We run them all against the censor, and we see how they all do,” Bock says. “We give them all numerical scores. The ones that do really poorly are killed off and the ones that do pretty well will live on to the next generation.”

The researchers put Geneva up against China’s censorship algorithm by using it on a computer with an unmodified Google Chrome browser in the country and found they were able to browse the internet without content being censored. They were also able to beat India and Kazakhstan’s censorship systems.

Russia has a somewhat unique censorship model in that the state doesn’t control the internet directly but rather has private internet service providers do the censoring for them, so it may be more complicated to beat Russia’s system. Dave Levin, an assistant professor of computer science at UMD and senior author of the research, tells Inverse they’re hoping to put Geneva up against Russian censorship as soon as they can.

“We have not yet gotten vantage points inside of Russia to probe censorship the same way we have in other countries,” Levin says.

Geneva could prove to be the best censorship-defeating tool that’s been developed, but one problem with creating a tool like Geneva is that governments might just find a way to block citizens from ever getting it. Levin says that’s not a problem quite yet.

“Right now—given that it’s such a new tool—I don’t think it’s really on the radars, just yet, of censoring regimes,” Levin says.

Levin says countries might also just try to improve their censorship systems and develop algorithms that can beat Geneva, but Geneva might be able to beat them by learning from the new obstacles being put in place. He says one way they might try to identify if someone is using Geneva is by looking for randomized data being sent across the internet that doesn’t look like it was created by normal human activity, but they could just train Geneva to be less noticeable at that point.

More like this
Innovation
8.15.2022 8:30 PM
This high-tech camera may help protect our identities — here's how it works
By Molly Glick
Innovation
8.11.2022 11:00 AM
“Quantum materials” could give the human brain a run for its money, scientists say
By Nathaniel Scharping
Science
12 hours ago
Wastewater can track viruses like Covid-19 — can it do the same for superbugs?
By Allison Parshall
Related Tags
Share: