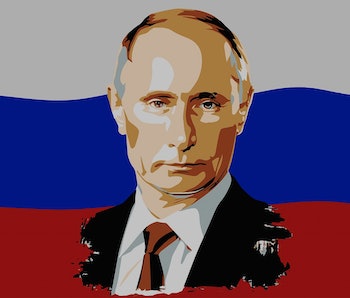 Russia strictly censors content on the internet and Russian President Vladimir Putin is actually trying to take control of Russia’s internet completely. As with any authoritarian regime, Russia especially loves to censor criticism of its leaders, which is often labeled as “extremism.” That might sound like a problem that only affects Russians, but a new study claims it could be a blueprint for censorship in the U.S.

The study, from the University of Michigan, claims that the U.S. repealing net neutrality rules could allow internet service providers (ISPs) to censor parts of the internet much as Russia does. To understand this issue, the researchers analyzed over 1,000 privately owned ISPs that are regulated by the Russian government.

Russia’s internet isn’t technically state-controlled, as you see in a country like China, so it would seem it’d be more difficult to censor content on this kind of decentralized network. However, Russia has been quite successful at censoring content despite ISPs being privately controlled. Something similar could take place in other countries where the internet is decentralized, like the United States.

Roya Ensafi, a U-M computer science and engineering assistant professor who helped conduct this study, said in a statement that Russia has essentially forced private companies to do the censoring for them.

“Russia has broken the mold of what we traditionally consider censorship,” she said. “They’ve essentially outsourced censorship to the thousands of privately owned ISPs operate in the country, requiring them to ban certain content without specifying exactly how. This creates a patchwork of blocking strategies that is quite effective and very difficult for users to circumvent.”

One could imagine a president like Donald Trump, who is known for strong-arming private companies to get what he wants and doesn’t care for the First Amendment, pressuring ISPs to get rid of certain kinds of content he finds objectionable. Any future president could do this since we don’t have net neutrality protections anymore. You can thank Trump and “douchebag” FCC Chairman Ajit Pai for that.

Russia passed a “sovereign internet” bill earlier this year that was signed by President Putin. This new law gives the Russian government the ability to take control of its internet completely by forcing ISPs in the country to install devices on their servers that are controlled by the Russian government for the purpose of censoring content.

“The pieces of equipment being installed at hundreds [of] Russian ISPs cost a few thousand dollars each—a negligible amount of money for almost any government,” Ensafi said. “They’ve created a very effective system using inexpensive commodity equipment. And it could be easily exported to any country with a similar internet structure—countries like the United States or Portugal or Brazil or England.”

See also: What Is the “Save the Internet Act”? The New Plan to Restore Net Neutrality

The study claims nearly 200,000 domains have been blocked under Russian censorship, and many more will be blocked in the not-too-distant future. The researchers warn that journalists, activists and citizens need to be vigilant so a similar situation doesn’t arise in the United States and other more democratic countries. Once you lose a right, you don’t tend to get it back.

More like this
Gear
Oct. 5, 2022
How Elon Musk plans to use Twitter for creating an 'everything app'
By Jackson Chen
Innovation
Oct. 6, 2022
The 50 cheapest, most clever things with near-perfect reviews on Amazon
By Mackenzie Edwards
Innovation
Sep. 28, 2022
Look: This tiny robot could change medicine forever
By Katie MacBride
Related Tags
Share: