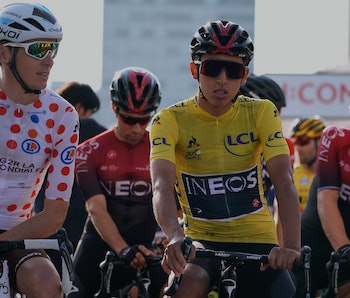 The turning point of this summer’s Tour de France came high on a mountain pass in the French Alps. It was a result of years of training — and possibly, according to a study released Monday, a reflection of how natural selection can be a boon for exercise.

When Colombian cyclist Egan Bernal began the Col de L’lseran ascent, the Tour’s highest point, he was behind cyclist Julian Alaphilippe by 90 seconds. On the descent, Bernal ended up 45 seconds ahead. He ultimately won the race, which had the highest route in the history of the Tour, with five summit finishes.

Bernal is from Zipaquirá, the Colombian city 8,600 feet above sea level. He was the first Andean native to win the tour. Living and training at that altitude provides advantages that have scientific backing: It’s known that high-altitude communities, where people live above 8,200 feet, typically have a higher aerobic capacity, bigger lungs, and more oxygen-binding hemoglobin in their blood. These physical traits help them perform in harsh, demanding environments.

First author Tom Brutsaert, an evolutionary biologist and professor at Syracuse University, tells Inverse that Andeans like Bernal are not “genetically predisposed to win the Tour de France.” But Brutsaert hypothesizes that Bernal’s genetics and background likely give him an advantage.

Brutsaert’s work supports the theory that high-altitude communities in the Andes may be genetically adapted to oxygen demands — and he was reminded of his research when he watched Bernal’s race.

“There’s been a surging of Colombian riders, all of whom were born at altitude and most of whom have some native ancestry, as do most people in the Andes,” Brutsaert says.

“The race this summer was the highest tour in history in terms of the mountain passes that they crossed. I remember watching the race and I turned to my son and I said, ‘You know, on that stage, on that day, Bernal’s going to win this race,’ and you know, he did.”

Brutsaert has studied people living in highland altitudes since the mid-‘90s and seeks to answer the question: Why are high-altitude natives so strong and physically impressive?

His new study evaluated the genes of 429 Quechua natives living about 14,000 feet up in the highlands of Peru, and 94 people living in Syracuse, New York. In turn, Brutsaert and his team found that five genetic markers near the EGLN1 gene exist at a higher frequency in the Quechua population, compared to the lowlanders. The team determined that these gene variants, or alleles, are advantageously associated with higher aerobic capacity in hypoxia. In other words, they can help a person thrive when oxygen is thin.

The EGLN1 gene is part of the hypoxia-inducible factor complex (HIF) and encodes a protein that regulates the way cells respond to low-oxygen. HIF plays an integral role in how the body responds to low oxygen concentrations.

The study doesn’t pinpoint a gene for improved athletic performance. But it does add compelling evidence to the hypothesis that natural selection around the EGLN1 gene may help Andeans survive and thrive in low-oxygen places.

Existing on the roofs of the world, whether it be the Qinghai-Tibet plateau or the Andes, puts the body under stress. The body needs a constant and continual influx of oxygen to function, and in these places, oxygen is limited: At 4,000 meters, a breath of air contains only 50-60 percent of oxygen molecules that would be contained in a breath at sea level. If you’re unadapted to these oxygen levels, health complications can cascade, ranging from shortness of breath to brain damage, if the oxygen shortage is severe or long-lasting.

However, millions of people live at these extreme altitudes, and most have limited complications.

Brutsaert’s study suggests a genetic connection: A key factor to thriving in low-oxygen places seems to be connected to genetic markers near the EGLN1 gene. The research suggests that the Quechua aren’t just strong because their lungs have adapted to their environment — their genes likely make them stronger too. This finding adds evidence to the idea that natural selection altered high-altitude communities’ genetic makeup.

The finding is one of only two associated studies on the Andean population. Future research could lead to novel treatment possibilities for other oxygen-related health problems, Brutsaert says.

“When you have a heart attack that’s basically cutting off the oxygen supply to cardiac muscle and the way that the heart muscle responds to that event is kind of through the HIF system,” he explains.

He posits that new treatments around the way cells sense and respond to oxygen levels in the body could emerge from studying high-altitude populations.

Athletes have been trying to gain competitive advantage through altitude training for decades, sometimes living at high altitudes then training at sea level or vice versa. However, the jury is still out on exactly how much training low or high makes a difference.

What is clear is that growing up in high-altitude regions is more likely to increase physical ability than short-term stints. And while that athletic advantage may not matter for a lowland competition like the New York City marathon, the physiological advantage does help highland people perform at high altitudes. While genes don’t make these individuals faster, years of environmental adaptations do matter — and increased aerobic capacity certainly helps when you’re cruising through the mountains.

Highland native Andeans have resided at altitude for millennia. They display high aerobic capacity (VO2max) at altitude, which may be a reflection of genetic adaptation to hypoxia. Previous genomewide (GW) scans for natural selection have nominated Egl-9 homolog 1 gene (EGLN1) as a candidate gene. The encoded protein, EGLN1/PHD2, is an O2 sensor that controls levels of the Hypoxia Inducible Factor-α (HIF-α), which regulates the cellular response to hypoxia. From GW association and analysis of covariance performed on a total sample of 429 Peruvian Quechua and 94 US lowland referents, we identified 5 EGLN1 SNPs associated with higher VO2max (L·min−1 and mL·min−1 ·kg−1 ) in hypoxia (rs1769793, rs2064766, rs2437150, rs2491403, rs479200). For 4 of these SNPs, Quechua had the highest frequency of the advantageous (high VO2max) allele compared with 25 diverse lowland comparison populations from the 1000 Genomes Project. Genotype effects were substantial, with high versus low VO2max genotype categories differing by ∼11% (e.g., for rs1769793 SNP genotype TT = 34.2 mL·min−1 ·kg−1 vs. CC = 30.5 mL·min−1 ·kg−1 ). To guard against spurious association, we controlled for population stratification. Findings were replicated for EGLN1 SNP rs1769793 in an independent Andean sample collected in 2002. These findings contextualize previous reports of natural selection at EGLN1 in Andeans, and support the hypothesis that natural selection has increased the frequency of an EGLN1 causal variant that enhances O2 delivery or use during exercise at altitude in Peruvian Quechua.