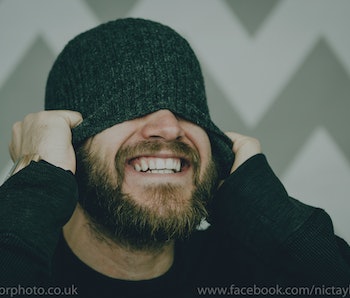 I recently took to Craigslist, that cesspool of human want, to fill an open room in my apartment. When the applications started rolling in, I did what most sensible, wifi-connected people do and Googled the shit out of my potential roommates. I wanted to know what each of their deals were, but I was just as eager to see pictures. That’s not because I want to fill my house with hotties, but because Craigslist isn’t known for being full of not-chatbots and you sometimes you judge a human by its cover. When I came across a Facebook account with a profile picture of say, a flower or a dog, I moved on. Who doesn’t have their picture on the internet?

I’m sure it’s pleasant to live the anonymous, LinkedIn-less life, but it’s also unusual and, on some level, unacceptable. Approximately 364 million people have a LinkedIn profile; 300 million people use Instagram, and more than one billion people have a Facebook account. Even Venmo asks you to upload a photo. (Yelp optimistically does too.) In a sense, you have to actively avoid posting a selfie if you use the internet. It’s legitimate for people to wonder why you’re hiding your face if that is your M.O.

That doesn’t make choosing a picture easy. And that sure as hell doesn’t make looking at selfies pleasant for non-narcissists.

Photography and sociology essentially share a birthday. Quite literally a lens in which to view society, photography has been the tool used to document individuals and traditions — digital photography doubly so. That said, according to researchers from the Queensland University of Technology, the emergence of DSLRs and smartphones has had less affect on the personal photograph than its relationship with the internet. While Robert Cornelius is credited with the first selfie in 1839, the emergence of social networking sites has encouraged a growth of more expressive self-portraits and a “shift among the young generation towards using photography as an instrument for peer bonding and interaction.”

We are now the curators of our digital-social lives. By selecting, distributing, and editing we can create a narrative of who we are by what photos we have decided to share. In his 2010 paper, Oxford research fellow Dr. Bernie Hogan, who has a great profile pic, describes this process as a form of “impression management.” Assholes call it having a “personal brand.” The upside is that, done correctly, photography is empowering. The downside: People are liars and their photos are often implicit lies. Hogan writes that this “conflation of performance and online profile is likely because the notion that because a blog or profile signifies a single individual it does not merely stand in for that individual but is that individual.” (Emphasis is mine).

Where this might seem most obvious is online dating. Using Tinder, Hinge, Bumble and the like is to be reliant on the impression you can give through your photos. Studies have shown that the majority of online daters use the apps as an opportunity to express their “truest selves” — qualities that make up who they are, but aspects you might miss upon meeting them as a stranger. Whether people like what they see is another matter altogether.

“Pictures are so useful for gathering a sense of who someone is, and I think they usually give me a pretty accurate impression of what someone online is all about in person,” says Bobbie, 25. “Profile pictures must be the most calculated, in terms of self-representation, on dating apps, where you want your future hookup or companion to gather the most important things about you just from the first few swipes. My roommate actually arranged his first four pictures on one dating app — figuring most girls won’t make it much deeper than that — to show off his job, his dog, his friends and his travels.”

Ava, also 25, uses the appropriate fun and casual pictures for Facebook and LinkedIn, but she has a different approach for online dating.

“I’ve used a joke picture of Steve Buscemi to ward off people that are just looking for looks,” says Ava. “I think this picture catches people off guard, so it makes me seem a little more interesting off the bat. And if someone doesn’t understand the Buscemi reference, we probably shouldn’t be hanging out anyway.”

You may scoff, but in a sense Ava is simply identifying as a Buscemi in an attempt to attract another Buscemi.

Still, it’s a sociologically untenable position. “As accurate as self-perceptions might be,” writes UC Davis Associate Professor Simine Vazire, “the self’s position as the ‘best expert’ on what a person is like is on shaky empirical ground.” Put another way: We are what we look like more than we are who we think we are.

Dr. Laura Naumann, who studied 123 students to see whether judgments based on physical appearance by strangers can reveal accurate information, found that subjects photographed twice, once in a standardized position with their hands at their side, were fairly easy for others to judge accurately. Those looking at the photos were asked to determine the subject’s Big Five personality traits, likability, self-esteem, loneliness, religiosity, and political orientation.

Subjects in a more relaxed stance were accurately deemed more emotionally stable, those who looked away from the camera and had less of a neat appearance were accurately pegged as more open to experience. People with higher self-esteem looked healthier, people who were religious stood in a more relaxed way. When subjects were in the standardized pose, observers were consistently accurate in judging their extroversion, self-esteem, and religiosity. Nine out of ten traits were judged accurately when observers looked at photos of the subjects in their spontaneous pose.

What does that tell us? When picking a picture to represent yourself online, be authentic. More than likely, people will be able to call your bluff if you’re trying to come off as someone you are not. Don’t panic and don’t overdo it. Just behave like a person and people will see you for you.

And here’s a comforting thought: In 2006, Dr. Vazire ran a study that found subjects routinely judged themselves to be less attractive than they were to their peers. You are beautiful and you are you and, if you’re on Craigslist, you’re just a little bit suspicious.

More like this
Culture
Jan. 14, 2023
2,454 years ago, one eerily familiar event led to the downfall of Ancient Athens
By Rachel Hadas and The Conversation
Innovation
Jan. 23, 2023
This biohybrid robot walks using lab-grown mouse muscles
By Joanna Thompson
Mind and Body
Jan. 21, 2023
Do detox diets work? A dietician breaks down the murky science
By The Conversation and Taylor Grasso
LEARN SOMETHING NEW EVERY DAY.
Share: