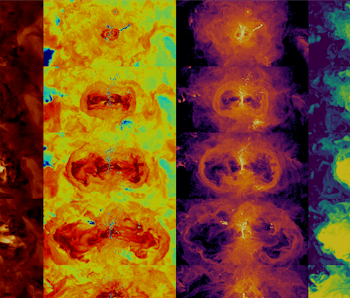 Picture the universe: More than 20 billion particles of dark matter, stars, galaxies, supermassive blackholes, gas and magnetic fields, all interacting together over the course of 13.8 billion years of the early cosmic age. Now, try to imagine even a fraction of it squeezed into a box the size of your screen.

That’s precisely what a team of scientists at the Harvard-Smithsonian Center for Astrophysics have done. Using new computer simulation techniques, the team have reconstructed a slice of space some 230 million lightyears away. While they can’t peer back in time, this simulation may be the next best thing — allowing astrophysicists to observe in unprecedented detail the early evolution of thousands of galaxies.

Already, their work is bearing fruit. Their initial observations, published in the journal Monthly Notices of the Royal Astronomical Society, revealed how the flow of cosmic gas shapes the stellar structure of galaxies like our own.

Dylan Nelson, a postdoctoral fellow at the Max Planck Institute for Astrophysics and an author of the new study, tells Inverse why this simulated universe is so special.

“Compared to other “universes in a box,” TNG50 is able to capture very small-scale details, which allows us to see and explore the internal properties of galaxies themselves,” Nelson says.

TNG50 enables astrophysicists to explore thousands of galaxies in a large area of space for the very first time. It also recreates all the dynamic interactions between the galaxies in stunning detail.

The simulation shows how disc galaxies like our own Milky Way settle into their shape. The gas clouds surrounding galaxies in the early universe are chaotic and turbulent, with gas flowing out of galaxies via explosive bursts of energy. After the gas flows outwards, a some of it eventually falls back into the galaxies over the course of millions of years.

In the simulation, the team observed how the gas flows in and out via certain paths, settling back in specific locations in the galaxies, where it then fuels star formation.

“As a result, new stars are born and accumulate such that they have orbits around the center of the galaxy which resemble circles and ellipses,” Dylan says. “This means, in the end, that the stellar shape of the galaxy becomes more and more disk-like over time.”

It was an unexpected result, says Dylan. “We were very intrigued because these are aspects of the simulation which are not at all ‘put in’, but rather emerge naturally.”

By further observing this “universe in a box,” the team will get a better idea of how stars formed in the early years of the Milky Way — and how our galaxy itself got its structure.

“The simulation contains about 100 Milky Way analogs and its resolution means that we can study how the stars in our own galaxy assembled across cosmic time,” Dylan says. “TNG50 will undoubtedly provide some interesting answers to puzzling questions in the galactic archaeology of the Milky Way.”