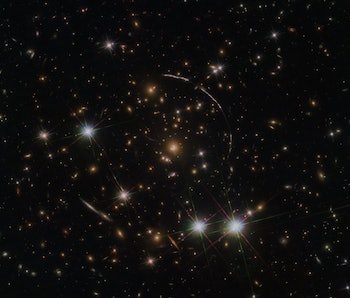 At some point during the earliest years of the universe’s existence, the cosmos went from opaque to transparent. Now, astronomers say they have observed the process that made it happen.

Around 2-3 billion years after the Big Bang — a time referred to as ‘cosmic noon’ — most stars had formed and galaxies were at their brightest. During this time, opaque clouds of neutral hydrogen gas surrounding these young galaxies changed and turned see-through.

In a new study, published Thursday in the journal Science, astronomers report exactly how that happened.

“That’s basically if all the oceans went from being liquid to being steam,” Emil Rivera-Thorsen, an astrophysicist at Stockholm University and lead author of the study, tells Inverse. “It’s a major transition, a dramatic change in many ways.”

Under the cosmic microscope

In a quest to find out how that transition took place, the team looked to a galaxy known as the Sunburst Arc. A galaxy cluster provided them with a gravitational lens, which occurs when cosmic matter behaves like a microscope and bends the light coming from whatever is being observed — in this case, Sunburst Arc.

“It’s a very atypical phenomenon to see,” Rivera-Thorsen says. “And we wouldn’t have found it if it didn’t happen to line up with one of the most massive galaxy clusters in the foreground that could serve as a gravitational lens.”

Sunburst Arc happens to be the brightest lensed galaxy ever observed, providing a unique opportunity to study rare cosmic phenomenons. For this study, the team focused on the question of how ionizing gas escaped from early galaxies. Understanding this phenomena would enable scientists to better understand how the universe has developed over time, the researchers say.

“This is about the childhood and the early teens of the universe, which has now reached its middle ages,” Rivera-Thorsen says. “It’s like looking at dinosaurs.”

Using the Hubble Space Telescope, the scientists found the exact location in the Sunburst Arc where ionized ultraviolet photons escape from the galaxy into the intergalactic medium. Once these photons escaped in high enough quantities, their energy ionized the hydrogen surrounding the galaxy, breaking down the atoms to release their electrons. This process essentially turned the hydrogen gas into a transparent plasma.

It can be thought of as a cloudy day turning into clear skies, according to the researchers. “It’s basically like a really thick cloud layer in front of the sun,” Rivera-Thorsen says. “As these clouds evaporate, you see more of the sun’s light coming through it till it becomes completely transparent.”

The hole through which these photons escaped, clearing up the murky skies of the early universe, happened to line up with the scientists’ view of the Sunburst Arc, says Rivera-Thorsen.

“You have a light source which is wrapped in blankets of neutral gas but this blanket has a small hole and it’s almost entirely empty of neutral gas in it,” he says.

Winding back the clock

John Chisholm, a Hubble Fellow at the University of California-Santa Cruz and specializes in galaxies in the early universe, who was not involved in the study, says that this recent observation provides the most detailed view of how young galaxies shaped the universe around them.

“This is an analog of what the first galaxies must have looked like,” Chisholm tells Inverse.

Trying to observe the universe today without having an idea of what it once looked like would be like trying to imagine what a baby looks like by observing a middle-aged person, according to Chisholm.

“You’d never understand the wealth of development that happened throughout the course of someone’s life,” Chisholm says.