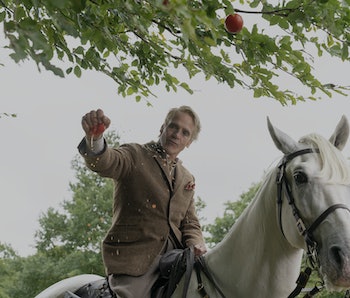 Damon Lindelof’s Watchmen is rife with mystery, offering more questions than it does answers in the first two episodes, chief among them being the identity of whoever actor Jeremy Irons is playing and what the all-powerful Doctor Manhattan has been doing all these years on Mars. One fan has an intriguing theory that the answer to both these questions has the same answer.

This is pure speculation, but if it’s right it could be a major Watchmen spoiler. Consider yourself warned.

In all of the show’s credits and even within the first two episodes, we never get confirmation of who Irons is playing, even if context clues imply that he’s Adrian Veidt/Ozymandias, from the original Watchmen comic. It feels almost too obvious, even if his estate and manner of dress feel “otherworldly” in an uncanny way.

However, one fan’s surprising theory is that Jeremy Irons’ character is actually Doctor Manhattan disguising himself as Adrian Veidt and attempting to create life.

“The news clip talking about Manhattan being on Mars shows a huge cathedral-like construction falling apart,” they write. “I believe he may have replaced it with the manor and grounds — still on Mars, but so earth-looking as to misdirect the viewer.” During Episode 1, we see news footage of Manhattan doing things on Mars, destroying a castle made of sand that’s shaped an awful lot like the castle Jeremy Irons’ character lives.

To regular people, Manhattan’s experiment might look like huge piles of red sand, but perhaps to him, it’s all an illusion made to look like a lush country estate where he plays Adrian Veidt, running through simulations as he tries to create life? Perhaps Manhattan is hallucinating, having been driven mad by his godhood?

“The show has gone out of its way to state over and over again that Manhattan is on Mars,” the theorist also writes. “In the second episode, two characters have a discussion about the fact that Doctor Manhattan can’t make himself look human, he can only duplicate himself. I believe these are both misdirections, and his powers have advanced.”

The theorist is referring to a conversation from early in Episode 2 where Sister Night interrogates the elderly Will Reeves, having just taken him from the scene of Captain Judd Crawford’s murder. “He can’t look like us,” Sister Night says, after Will toys with her by arguing that he might be Manhattan in disguise, and that’s how he was able to hang Crawford. Will Reeves doesn’t have superpowers — even if we think he might be Hooded Justice — but these two also note that Manhattan can duplicate himself in some way.

No one in the universe, not even Manhattan himself, knows what the blue god is truly capable of. Ozymandias thought he could destroy Manhattan in the original comic story, but the “smartest man in the world” was wrong. Maybe the general public is wrong about this as well?

The Lord of the Manor’s play he writes in the first episode, called The Watchmaker’s Son, is also an overt reference to Doctor Manhattan who was a watchmaker’s son named Jon Osterman before he was transformed. Veidt spent years trying to smear Manhattan’s public image, uniting the world against Manhattan and against a manufactured alien threat that killed millions of people. During their final conversation, Manhattan tells Veidt that he wants to create human life.

>Doctor Manhattan: Yes, I have. I think perhaps I’ll create some.

Is it possible that Manhattan winds up back on Mars where he tries to create artificial human life? Ms. Crookshanks and Mr. Phillips could be artificially created people, and the Lord of the Manor could either be Manhattan himself or a facsimile of Adrian Veidt. Either way, there is probably a strong connection between Manhattan and whoever Jeremy Irons’ is playing.

In the official episode descriptions, “the Smartest Man In The World (Jeremy Irons) plots a daring escape” during Episode 5. What if his “daring escape” is to escape this illusion he built for himself and re-enter the real world? We’ve got only a handful more episodes before we know for sure.