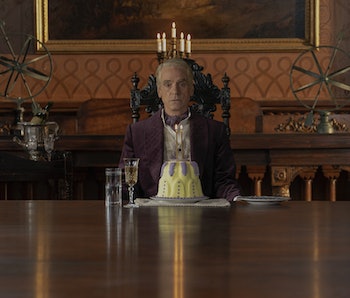 Damon Lindelof’s Watchmen series on HBO has finally premiered, and for anyone who caught a series of Easter eggs in the first episode, it should seem abundantly clear that something strange is going on with Adrian Veidt (aka, Ozymandias), who is the man from the Watchmen graphic novel that Jeremy Irons is supposedly playing.

Having finally seen only the first episode of Watchmen, here’s my theory: Adrian Veidt is dead, and Jeremy Irons plays some kind of transhumanist robot/cyborg/clone that carries on posing as Ozymandias for reasons we don’t know yet.

Since the early stages of Watchmen’s marketing, the identity of Jeremy Irons’ character has been the source of great mystery, misdirection, and confusion. Context and reason led us all to assume that he’s playing an older Ozymandias, the ostensible anti-villain of the original story.

Then a young noble, Veidt was the “smartest man in the world” and reached peak human physical condition through meditation, diet, and intense training. He even caught a bullet once. His plan was to manufacture a conspiracy against costumed heroes and bio-engineer a giant fake telepathic squid alien that would end the Cold War by uniting all the global superpowers against this new threat. It worked, for the most part.

In the new Watchmen series, Irons plays a man of appropriate age who dresses in opulent clothing, is of similar build and demeanor, and he meditates. That’s enough evidence to make the assumption.

So why did the official Watchmen Twitter account play coy when announcing the lineup for the New York Comic Con panel?

"“Jeremy Irons — Probably Who You Think He Is"

For some reason, the folks at HBO want us to think Irons might be playing someone else. This feels suspicious, even in the current spoiler culture rampant in entertainment media right now. If he’s an older Ozymandias, why not come out and say it? One possible explanation is that he does play the physical form of Ozymandias, but there’s a complication.

24 minutes into Watchmen Episode 1, Regina King’s Detective Angela Abar goes to her bakery to suit up as Sister Night, and a man in a wheelchair (who remains an important figure in the series) is reading The Tulsa Sun. The headline states “Veidt Officially Declared Dead.” In case you might confuse it with another Veidt, the first paragraph reads as follows:

Adrian Veidt, the industrialist and political kingsmaker who parlayed a career as a costume adventurer into a ubiquitous brand name and a vast corporate empire, was formally declared “presumed deceased…

To the public eye, Ozymandias has died.

About 18 minutes later in the episode, Jeremy Irons rides a stallion onto his idyllic estate in what seems like Scotland. Then we see him in the nude, writing a play on a typewriter while his maid Ms. Crookshanks massages his thigh. The butler, Mr. Phillips, comes in to dress Irons’ character in formal dinnerware. The “special occasion” is his “anniversary” that Crookshanks and Phillips seem excited about, while Irons’ character is nonplussed, even irritated. In all of their scenes, the two servants appear placid and vapid in an uncanny way — as if they’re not human at all. The whole sequence feels very odd.

The servants made a weird cake for the anniversary with a single big candle, and Phillips offers a horseshoe to cut the cake. A horseshoe. Is he … a malfunctioning robot?

Irons’ character announces he’s writing a play called The Watchmaker’s Son and that these two servants are to play the lead roles. That’s all we get of these characters in Episode 1.

Given the context here, it seems like Veidt invented some kind of cloning or transhumanist A.I. technology. He used it to build human-like servants. But he also stored a piece of his consciousness somehow, so that when he was injured and wound up in a coma a year ago, it was transferred into a facsimile of his body.

The newspaper headline is recent, so Veidt’s physical body only just died, but his robot is celebrating his one-year anniversary. He’s also self-aware enough to be a bit depressed being reminded of his own death.

Doesn’t this feel like the perfect explanation as to why Jeremy Irons at once plays, but also doesn’t play, Ozymandias?