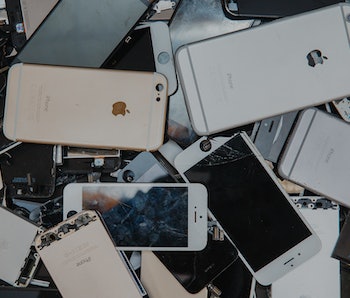 If you have an older generation iPhone (or two) gathering dust at home, it might be time to take advantage of Apple’s trade-in program and start earning money off your next new Apple product.

While Apple’s trade-in program isn’t new, the company has been doubling-down on its promotion of it in the last year and Apple CEO Tim Cook told GQ this week that about one-third of visitors making purchases in Apple stores are now making use of the company’s trade-in program.

While Apple lists these as estimated trade-in prices, all actual trade-ins are evaluated based on the “the device, model, manufacturer, and condition.” So, if your phone is dinged up, you might be looking at a slightly lower trade-in value.

As for Apple devices not eligible for trade-in, you can still bring those to Apple (either by mail or in-person) to safely recycle them.

How do you trade in an Apple device?

Once you’ve gathered your pile of neglected electronics, you can either decide to trade them in through the mail or in-person at an Apple store. If you’re doing it remotely, you’ll need to answer a few questions about your device and its condition and Apple will send you a prepaid trade-in kit in order to send it to them. Based on confirmation of your device’s condition when they receive it, Apple will offer you cash-back in either the form of credit toward a purchase or as an Apple Store gift card.

It’s up to you which you choose and really just depends on whether you plan to make a new device purchase immediately or if you’re waiting.

Is your data safe if you trade-in?

Apple will guide you through removing your data from any trade-in devices but ultimately claims no liability should you lose data or files. In order to guarantee your personal data and files are protected and deleted of any old devices make sure you’ve turned off applications like Find My iPhone, backed-up your files to the cloud and wiped any remaining data from your device.

Steps to do so on an iPhone can be found here.

Once you’ve accepted the cash-back value of your old devices you’ll be able to immediately turn around and start using that cash towards something new. If you’re making a new purchase immediately after a trade-in that value will be credited toward your purchase both online and in-store. If you decide to wait to purchase after your trade-in then Apple will provide you a gift card to use at a later date instead.

While Apple’s trade-in program does deal specifically with Apple products that certainly doesn’t mean it’s the only name in the game. Cellular providers like T-Mobile and Verizon also do trade-in programs, as does Best Buy and online companies like Gazelle. Some of these programs offer 1-to-1 trade-ins like Apple while others offer cash instead.

If you’re looking to getting money off a new device though, Apple might still offer a better value. A fully-functional, scratch and crack free iPhone X 256GB ( with AT&T) on Gazelle is going for only $314 while Apple is offering “up to $400” for the same device.