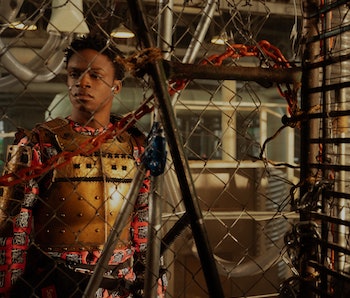 One of the hottest Netflix shows, Daybreak, also has one of the coolest cameos of all time. In the show’s fifth episode, told from the perspective of jock teenager turned wandering samurai Wesley (Austin Crute), story narration is performed by none other than RZA, founding member of the Wu-Tang Clan.

In an interview with showrunner Aron Eli Coleite with Inverse, getting RZA was unexpected, but not that hard either.

“It was a stroke of luck and genius,” Coleite tells Inverse. “I never expected to get RZA or Matthew Broderick. They read the script and responded and wanted to be a part of what we wanted to do. With RZA, it was the character Wesley.”

In Daybreak, a new Netflix series based on the comics by Brian Ralph, California teenager Josh Wheeler (Colin Ford) navigates a chaotic Los Angeles after all the adults in the world turn into zombies. One of Josh’s allies, Wesley, is a pop culture-obsessed football player who picks up a katana, dons samurai armor, and devotes himself to Bushido as penance for his sins as a bully.

Episode 05, titled “Homecoming Redux or My So Called Stunt Double Life,” is an episode devoted to telling Wesley’s perspective of the series. Coleite and the show’s writers wrote the episode with RZA narrating in mind, but no one expected the music legend to actually agree to the show.

“Wesley imagines he has a narrator for his saga, in an homage to Conan the Barbarian, Samurai Jack, and Kurosawa films. All of those, whether it’s anime or movies, they have narrators. So of course, he has a narrator.”

RZA and the Wu-Tang Clan are pioneers in hip-hop as they imbued their obsession for Asian cinema, martial arts, and comic books into their music. The group name originates from the 1981 kung fu film Shaolin and Wu Tang, and their iconic debut album Enter the Wu-Tang (36 Chambers), released in 1993, is titled after the 1978 Shaw Brothers classic The 36th Chamber of Shaolin.

RZA, who founded the Wu-Tang Clan with a clique of Staten Island rappers, said in the 2004 book Wu-Tang Manual: “I got my introduction to kung fu flicks in ‘78 or ‘79 … At that point, all of 42nd Street had kung fu movies.”

“So ODB and I, we were always out at night around Times Square—starting fights, getting drunk, chasing women, going to the Roseland—and this one night, we were really high, we’d been out all night and didn’t want to go home. It was cold and we had a couple of 40-ounces and we thought we’d crash at this funky theater at Forty-second Street and Seventh Avenue.

“So we went in, at maybe four in the morning, and sat down to watch whatever was one. Some we had seen before, but there was one that we’d never seen: Shaolin and Wu-Tang. We walked in near the end of it, and just from the last few minutes I was like, ‘What the fuck is this?’ It ended and another movie came on and we watched that, and Dirty wanted to leave. But I was like, ‘I got to see that movie.’ We stayed and when it came on, it woke us up. It was the best kung fu movie I’d ever seen in my life—the fighting, the ideas, the concepts, everything.”

“They’re one of the first hip-hop groups where I felt the cross-section between African-American culture and Asian culture,” Coleite says. “When we started talking in the writer’s room, we discussed the cultural impact and why that is so pervasive. Why we have Kung Fu Kenny and Nicki Minaj putting out albums as Chun-Li.” Coleite also name-drops the 1985 cult classic marital arts movie The Last Dragon, starring Taimak, as “one of my favorite movies.”

“We were talking, ‘Why did this happen?’ and understanding the cultural intersection of it. Wesley is emblematic of that intersection. When we were talking about who was gonna narrate his life, RZA made the most sense. We wrote the script for RZA. He read it and was totally down.”

Daybreak is streaming now on Netflix.