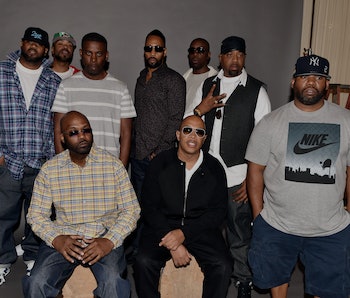 You will never find a better compilation of dope rappers than the Wu-Tang Clan. Nobody expected rappers this good from arguably the least gangster borough in NYC, Staten Island. But, the Wu were not your average gangster rappers. Although their music is the quintessential representation of the ‘90s gritty, rugged rap style that New York City was known for, Wu-Tang Clan brought a personality to rap music that many would consider “geeky”.

It is no secret that the members of the Wu are big nerds. In a 2009 interview with True/Slant, RZA, one of the many members of Wu-Tang Clan, referred to himself as being a geek, citing his geekiness as the reason behind his creativity. Their name, videos, and style are all inspired by old kung-fu movies. They even refer to their neighborhood as the Slums of Shaolin. If it was not obvious before, we have compiled a list of multiple works from the Wu that absolutely scream nerd.

In 1999, Midway Studios released Wu-Tang: Shaolin Style, a game which allows the user to play as all nine members of Wu-Tang Clan. The player fights through 36 chambers — as expected — and battles enemies in a ‘70s kung-fu movie backdrop. The graphics are obviously choppy and the violence and gore is reminiscent of another cult classic, Mortal Kombat, but many people enjoyed it and it remains a classic among gamers.

Method Man and Ghostface Killah are two big superhero geeks. Method Man is very open about his love for comic books. He frequents Comic Book Jones in Staten Island for all the newest comics. He sometimes goes by the name Johnny Blaze, a reference to Ghost Rider. He also made a song entitled The Riddler for the Batman Forever soundtrack.

Ghostface Killah is obsessed with Iron Man and named his debut solo album after the iron clad superhero. His fanaticism even landed him a cameo role in the first Iron Man movie in a scene that was later deleted from the final movie cut. He also created a song for the Iron Man soundtrack.

Why not take your love for comics and create your own? In 1999, the nine members of Wu-Tang Clan were featured as characters in their own comic book which is heavily influenced by both superheroes and kung-fu movies.

The members of the Wu have made several appearances in television shows, voicing characters or creating music for the cartoons. Ghostface Killah appeared in an episode of The Boondocks, providing Huey with zen-like words of wisdom. Method Man and Redman (although not a member of the Wu) were part of The Fairly Oddparents Musical. Furthermore, RZA produced the soundtrack for Afro Samurai, a very great anime about a Black samurai. Their influence in cartoons cannot be ignored.

Wu-Tang Clan was able to combine their gritty lyrics with kung-fu and superhero imagery to create music that nerds could get into and identify with. Whether it be RZA comparing himself to Dr. Doom, Inspectah Deck “swinging through your town” like Spider-Man, or the multiple Voltron references, the music is wrought with nerdy metaphors and similes. The GZA, in his album Liquid Swords, follows the story line of a kung fu movie in typical Wu-Tang fashion.

Wu-Tang Clan inspired a whole group of artists that are not ashamed to hide their nerdiness. Whether it be MF Doom, Kanye West, or Tyler The Creator, they follow a style that Wu-Tang left behind. Being a nerd is not something to be hidden, but something to be embraced. Wu-Tang showed that people from the most decrepit of neighborhoods could still be some of the biggest nerds.