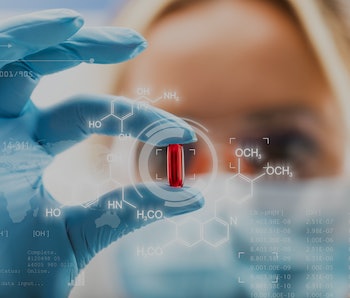 Fighting the flu is notoriously difficult. Scientists play an annual guessing game to target the most likely influenza strains to hit, create a specialized vaccine, then distribute it internationally. The flu shot works — but only about half the time. That’s why experts are eagerly searching for the holy grail of virus inoculation: a universal flu vaccine or treatment that stops illness and the dreaded symptoms it brings with it, including fever, chills, and fatigue.

Recently, the Institute of Biomedical Sciences at Georgia State University announced we’re one step closer to that better flu-fighting future. According to a study published Wednesday in Science Translational Medicine it’s possible that one day, in addition to your flu shot, you could take a pill that clears up symptoms if you still end up sick.

“The best disease is really the disease that you do not get and that is obviously what vaccination is ultimately all about,” Richard Plemper, Ph.D., senior author of the study and a professor in the Institute for Biomedical Sciences, tells Inverse. “And even partial protection is better than no protection.”

"The best disease is really the disease that you do not get.”

But it would be better still to be fully protected. In an effort to better fight flu symptoms when the flu shot doesn’t work, Plemper and his colleagues developed an antiviral drug that causes the flu virus to mutate, interrupting the virus’s replication and making it nonfunctional. The drug stops the spread of flu in the body and reduces the virus burden, inflammation, and length of fever caused by the flu.

It works by blocking RNA polymerase, an enzyme that helps the influenza virus genome replicate, and causing the virus genome to mutate. With enough mutations, the flu virus stops replicating and is essentially rendered harmless.

The flu virus can typically avoid an attack — but it has a tough time hiding from this antiviral drug. Here the drug was given to ferrets sick with various strains of seasonal and pandemic flu. In turn, the drug was successful in inhibiting every strain, including the notorious and devastating strain of swine flu, or H1N1, that especially did damage in 2009. The ferrets given the drug became less sick and experienced fevers of shorter lengths compared to those who did not.

The team also tested the drug in disease-relevant human tissue models (tissue cultures are a good model for examining how the human body actually operates) and found similar flu-fighting effects. However, success in human tissue doesn’t necessarily mean the drug will be successful in human bodies, and the team wants to conduct future studies that can confirm these results in human patients.

The idea is that this drug won’t replace the annual flu shot, but work as a sort-of sidekick that can help prevent the estimated 300 to 600 thousand seasonal flu-related deaths per year worldwide.

“The problem is too many people all over the world are dying of what we consider benign normal seasonal influenza every year,” Plemper says. “That has to change.”

"That has to change.”

Plemper says the therapy would be used to alleviate symptoms and manage infections. While he can’t currently predict when the drug would be available to the general public, Plemper does think the team will be approved to conduct trials on humans next year.

“If therapeutics can, in addition, make a difference — contribute to reducing disease burden, I think that’s the goal,” he explains.

An effective orally available flu treatment could be attractive the over sixty percent of the United States population who don’t get their annual flu shot. Importantly, it could also help vulnerable populations prone to developing complications or advanced infections from the virus: the elderly, children, pregnant women, and people with compromised immune systems.

“The compound is highly efficacious against influenza,” Plemper explained further in a statement. “It’s orally available, it’s broad spectrum against all influenza virus strains tested, and most importantly it establishes a high barrier against viral escape from inhibition.”

The research was in ferrets and human tissue, but not on humans, so applications to the broader population are limited. Human randomized clinical trials, the gold standard of research, are needed to confirm the drug’s efficacy. Yet, data suggests that the flu shot isn’t enough to keep people well 100 percent of the time — and an antiviral drug could be what we need to take down the flu quickly and effectively.