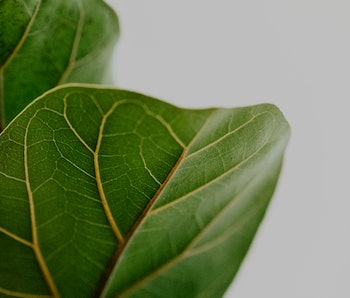 New research suggests that an ‘artificial leaf’ designed to cleanly create synthetic gas could be the answer to helping these industries finally begin taking greener steps forwards. While green technology has already made its way into our cars and homes, in larger transportation industries like aviation and shipping, the transition has been much more challenging. These heavy technologies rely on fossil fuel to operate and electric options just aren’t cutting it yet.

“Liquid synthetic fuel obtained from syngas is a zero-emission alternative to fossil fuels,” Virgil Andrei, the first author on a study into the matter, told Inverse. “Ideally, CO2 would be first captured from the atmosphere and then converted back into fuels, thereby closing the carbon cycle.”

The study, published Monday in the journal Nature Materials, uses a photosynthesis mimetic process to absorb light in order to spark a chemical reaction that transforms ambient chemicals into the components of something called ‘syngas.’ This is done by submerging the leaf, which is a thin mash-up of light receptors and a cobalt catalyst, in water and breaking down water into oxygen and hydrogen as well as air into carbon monoxide and hydrogen. These latter two chemicals make-up syngas and the researchers found that the reactions were possible even in low light, expanding the potential usefulness of this technology.

The study’s senior author, professor Erwin Reisner from the University of Cambridge’s department of chemistry, says that while syngas might be little known by the general public, it is in fact already powering many of the products we used daily.

“You may not have heard of syngas itself but every day, you consume products that were created using it,” Reisner said in a press release. “Being able to produce it sustainably would be a critical step in closing the global carbon cycle and establishing a sustainable chemical and fuel industry.”

This research is far from the first to work on the creation of syngas, but the authors explain that what separates them from other studies is that their approach is solar-driven, unlike others that still rely on fossil fuels. It’s also much cheaper thanks to its use of the abundant precious metal cobalt, unlike other processes that use platinum or silver.

Syngas by itself isn’t incredibly useful, but it can be used as a chemical building block to create “industrial synthesis of conventional fuels, alcohols, and long-chain hydrocarbons.” And with a green, cheap way to create syngas, the authors write that they now have their eyes on the creation of liquid synthetic fuel as well as an alternative to oil.

“There is a major demand for liquid fuels to power heavy transport, shipping and aviation sustainably,” said Reisner.

Syngas is already a building block of liquid synthetic fuel, and Andrei says that they’re hoping to be able to create the whole process end-to-end with the use of their artificial leaf.

“We are aiming at sustainably creating products such as ethanol, which can readily be used as a fuel,” said Andrei in the press release. “It’s challenging to produce it in one step from sunlight using the carbon dioxide reduction reaction. But we are confident that we are going in the right direction, and that we have the right catalysts, so we believe we will be able to produce a device that can demonstrate this process in the near future.”

Andrei told Inverse that this would provide a closed-loop option for carbon consumption which could enable the aviation industry, which currently creates two percent of global CO2 emissions annually — equaling roughly 859 million tonnes, to finally begin to lower its emissions levels.

And, while we wait for the electric planes of Elon Musks’ dreams, the potential for clean fuel alternatives for these industry giants is a step toward cleaner overall emissions in the future.

The photoelectrochemical (PEC) production of syngas from water and CO2 represents an attractive technology towards a circular carbon economy. However, the overpotential (that is, energy loss), low selectivity and cost of commonly employed catalysts make this sustainable alternative challenging. Here we demonstrate a highly tunable PEC syngas production by integrating an earthabundant cobalt porphyrin catalyst immobilized on carbon nanotubes with a triple-cation mixed halide perovskite and BiVO4 photoabsorbers. Empirical data analysis is used to clarify the optimal electrode selectivity at low catalyst loadings. The perovskite photocathodes maintain selective aqueous CO2 reduction for one day at light intensities as low as 0.1 Sun. Perovskite–BiVO4 PEC tandems sustain an unprecedented bias-free syngas production for three days with solar-to-H2 and solar-to-CO conversion efficiencies of 0.06 and 0.02%, respectively, operating as standalone artificial leaves in neutral pH solution. These systems provide potential pathways to maximize daylight utilization by sustaining CO2 conversion even under a low solar irradiance.