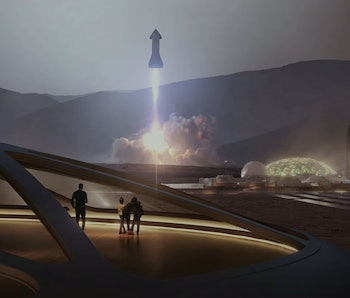 SpaceX’s manned mission to Mars is taking shape. But much like any long road trip, a key question is emerging: where do we stop for fuel?

For Elon Musk, the answer is blowing in the Martian wind. Over the weekend, the SpaceX CEO revealed more details about his proposed plans to establish a base on Mars. Central to this trip is the Starship, a fully-reusable rocket that runs on liquid oxygen and methane. Musk’s plan is to build a propellant depot on Mars that will be able to create more fuel by using resources available on the planet.

As for where the power comes from for this space-age fuel depot? Solar, of course!

“Depends on total system efficiency & how long the propellant plant can run to refill Starship, so 1 to 10MW as a rough guess,” Musk explained.

With Musk’s declaration, the plan for the Mars base is coming further into focus. Thanks to the fuel depot, the inhabitants can return home, or even venture out further and create a network of propellant depots, establishing humanity as a multi-planetary species.

SpaceX Starship: how the Mars base could offer refueling services

First, a quick primer. SpaceX plans to send two unmanned Starships to Mars, followed by two unmanned and two manned Starships. These six ships will provide the materials to establish the first base, set up essential life support systems, and start a refueling depot.

Based on Musk’s comments over the weekend, this ISRU plant will require somewhere between one and 10 megawatts.

Robert Zubrin, author of several books about visiting Mars, took these figures to calculate the likely size of a solar array. Assuming an average of one megawatt over a day and night cycle, this would require a solar array measuring 40,000 square meters. This would be the equivalent of four football fields!

Depending on the solar panels in use, Zubrin estimates that an array may weigh around 4 kg per square meter. That would result in a mass of around 160 tons. Each Starship is estimated to carry around 150 tons of cargo, hence the need for multiple Starships.

Zubrin estimates that producing two tons of liquid oxygen and methane every day would need around one megawatt of power. The power figures cover carbon dioxide acquisition, electrolysis, and cryogenic liquefaction.

If the team requires 780 tons of fuel to return home, that means that it would take around 390 days to produce enough fuel to come home, or a year and a month. Considering how the Earth and Mars reach their closest point around every two years, that gives enough time to refuel and get ready to come home.

Those humans that first visit the planet will have a big task ahead of themselves. Paul Wooster, principal Mars development engineer for SpaceX, explained last year how the first visitors will likely need to extract one ton of water ice per day to fuel the ISRU system. They would need to become self-sufficient fast, establishing life support systems and creating the foundations for a new base. Life won’t be easy, and Musk has noted that the chance of dying will be much higher than staying on Earth.

The end goal is that, as early as 2050, SpaceX will have established a city on Mars. That city is not expected to come cheap — Musk has placed the price as somewhere between $100 billion and $10 trillion.