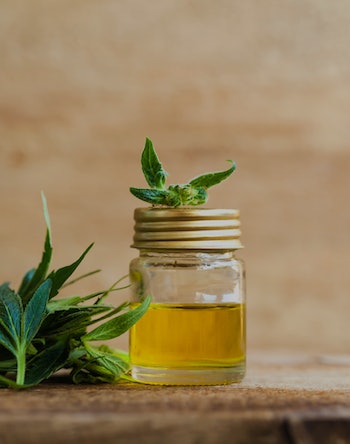 This Sunday, I’m thinking about CBD. Technically called cannabidiol, it’s one of the many natural compounds found in cannabis, and — despite its very questionable legal status — in a wide range of creams, oils, and foods. Often, the selling point of CBD is that it can alleviate pain, both mental and physical. You probably know someone who uses CBD, whether it’s your grandpa or Kristen Bell.

However, despite its immense popularity, a question remains: Does CBD really do anything for mental health?

Scott Shannon, M.D., an assistant clinical professor of psychiatry at the University of Colorado, tells me that when it comes to claims that CBD can help for a wide range of things, it might be overhyped.

But when it comes to anxiety and trauma, Dr. Shannon doesn’t think claims about CBD are overblown.

The problem is that there are simply not very many clinical studies that have evaluated how CBD can improve mental health. Andrew Penn, R.N., an associate professor at the University of California, San Francisco, explained to me that research on the benefits of cannabis has been “stymied by prohibitionist politics for decades.” It’s been relatively easy to study the harms of cannabis, but the legal hoops that researchers have to jump through have made it difficult to study its potential benefits.

Penn says that the personal stories people have about using CBD and enjoying its effects should “be used to help inform clinical trial that can test the effectiveness of CBD in treating specific conditions, but until those studies are done, it’s hard to say for sure that it’s an effective medicine.”

There is a handful of preclinical studies that suggest CBD could be used as a treatment for generalized anxiety disorder, panic disorder, social anxiety disorder, obsessive-compulsive disorder, and post-traumatic stress disorder. Importantly, these investigate acute administration — not long-term use. In one particular 2011 study, researchers found that among a group of people who were asked to speak in front of a large audience, those who took CBD before they spoke publicly were less anxious compared to those who received the placebo.

Penn points out that in this study, the subjects were given different doses of CBD — either 100, 300, or 900 milligrams. The 300 milligram dose outperformed the others, thanks to an “inverted U-shaped curve,” and reduced anxiety. But it’s difficult to say how that result can translate into real-life effects, because 300 milligrams is much larger than what people typically use in practice, and that amount can be quite expensive. But this study showed it might be a “Goldilocks” amount of CBD; it’s just right for healthy adults.

Importantly, these studies are becoming more common. Recently there have been small studies in humans looking at schizophrenia and social anxiety (those results have been mixed). And in January, Shannon and his colleagues published a study in The Permanente Journal that examined how CBD use affected 72 adults, some of whom were primarily concerned about their anxiety, and others who were more concerned about having poor sleep. The team found that, overall, 52 patients became less anxious over the course of the study. Meanwhile, sleep scores improved in the first month for 48 patients, but fluctuated over time.

Regardless of the lack of science that’s out there, none of it negates the fact enough people currently use CBD to treat a wide-range of symptoms. It’s so popular that it’s become a $200 million industry. But while it’s tempting to buy something that promises to help, Penn recommends that patients who choose to use CBD for mental health work with psychiatric providers to see how it impacts their symptoms and if it creates unwanted side effects.

“I think people should be cautious about believing all the claims of benefits of CBD,” Penn says. “While it may not be especially harmful, there isn’t always evidence that it will be helpful, and it’s not cheap.”