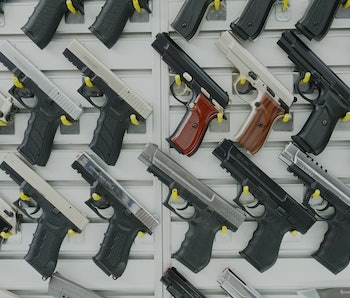 So far in 2019, there have been more mass shootings than days in the year. In turn, gun violence costs thousands of lives and an estimated 229 billion dollars each year in the United States.

Meanwhile, although homicide and violent crime rates have steadily decreased in the past few years, rates of gun violence and mass shootings are rising. Finding effective ways to cut down gun deaths and make the country safer is the central focus for the University of California, Davis Violence Prevention Research Program, which has been developing a public health approach to gun violence since the the 1980s.

On Monday, the program published research which reveals three opportunities to reduce gun deaths: fixing flaws in background check regulation, identifying dangerous gun owners with a history of alcohol abuse, and intervening in health care settings. These new studies are part of a robust, large-scale research effort to understand how guns impact life in America.

“All of them improve our understanding of the role that firearms play in life in the United States,” Garen Wintemute, an emergency physician and director of the Violence Prevention Research Program and the University of California Firearm Violence Research Center, explained Monday.

“They will help shape violence prevention efforts taken by policymakers, health professionals, and all the rest of us.”

Keeping guns out of the hands of people with violent histories has been proven to lower gun violence. Universal background checks can help identify who is the most high risk of committing gun violence and prevent their purchase of a gun. The vast majority of Americans support background checks. But the background check process isn’t perfect, and a study published Monday in Health Affairs found that cracks in the system can lessen the effectiveness of this process.

The study posits that there are a number of holes in the universal background check system. Some issues lie in underreported or incomplete data: Often, local agencies fail to accurately report to state agencies, who in turn fail to report to the Federal Bureau of Investigations. This contributes to missing data and incomplete criminal history databases.

The study argues that these failures, which occur across the entire background check process, prevent the firearm regulation from protecting against violence as comprehensively as it could.

Some extra steps could reduce these mistakes: Instituting a permit to purchase process — where someone would need to visit local law enforcement to get a permit to purchase a gun — could make universal background checks even more effective. A permitting system, especially one that would include fingerprinting, would centralize who gets firearms and who lends them out. Fewer people likely to commit violence would slip through the system unnoticed.

Forty percent of Americans report owning a gun, or living in a house with one. Most report using guns to hunt, for sport and recreation, or to protect against crime. And while most gun owners will never commit violence, some people are more likely to harm others than others.

Gun purchasers with DUI convictions, but with no other arrests or convictions, are almost three times more likely to be arrested for intimate partner violence than people with no criminal history, a new study also published in Health Affairs shows. Gun purchasers with additional arrests on top of DUI histories were even more likely to commit violence against their intimate partners.

These findings suggest keeping guns away from people who have violent histories and histories of risky alcohol use could reduce the escalation of violent events.

Doctors, in the emergency room and trauma wing, are often on the receiving end of gun violence. In treating gunshot wounds and counseling patients, doctors have the rare opportunity to discuss gun use.

In a paper published in Annals of Internal Medicine published last November, a group of physicians emphasized the need for gun violence to be treated as a public health threat and suggested a comprehensive set of gun regulations. In return, the National Rifle Association (NRA) told doctors to “stay in their lane.” This criticism sparked an outpouring of healthcare experiences shared with the hashtag #thisISmylane, as well as pictures of bloody scrubs post-surgery and anecdotes of losing patients.

The third new study highlights why the existence of that “lane” is important for the public at large. Researchers found that most Californians support health care professionals discussing gun safety with high-risk patients and gun owners who share thoughts of suicide or trouble with drugs and alcohol.

The study also found that the majority of Californians support health professionals intervening when a patient is at acute risk of firearm injury. Intervening could mean counseling a patient not to hurt themselves or others, as well as informing the patients’ family, a mental health professional, or police if a patient shows signs of causing or receiving immediate harm. This research suggests that patients may be more receptive to firearm safety-related guidance from health providers than previously thought.

Closing the gaps in universal background check regulation, better identifying the people most likely to carry out violence, and encouraging physicians to take a focused, risk-based approach to patient guidance, could all help make the United States safer. The more we understand how people use guns, the better we can predict and prevent the next gun death.