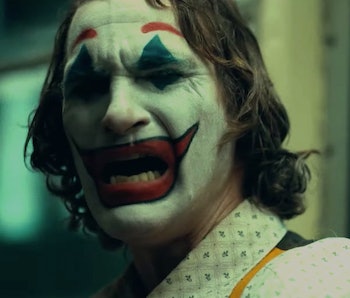 Before Joker even came out, fans of the Batman arch-villain pointed out one weird inconsistency in the movie: If Joker’s origin story takes place when Bruce Wayne is a young boy, how could Batman grow up to fight a criminal who would by then be an old man? The response, for many, was that Arthur Fleck (Joaquin Phoenix) isn’t the actual “Joker,” he’s the guy who inspires the Joker. It was an interesting theory without much evidence to back it up, but now, a quote from the Joker director himself may confirm this theory was right all along.

“Maybe Joaquin’s character inspired the Joker,” Phillips said. “You don’t really know. His last line in the movie is, ‘You wouldn’t get it.’ There’s a lot going on in there that’s interesting.”

While I’d argue that Phoenix’s last line of the movie isn’t particularly interesting (they should have cut that whole final scene, to be honest), it is interesting to consider that Arthur Fleck isn’t actually the Joker who’s appeared for decades in comic books, cartoons, and DC movies.

But to really unpack what this means, we have to talk about Joker’s ending. So consider yourself warned: Full spoilers for the end of Joker after this creepy GIF.

By the end of Joker, Arthur Fleck has completed his transformation into killer clown. In the process, he’s inspired a wave of riots across the city as angry Gothamites in clown masks and makeup burn, loot, and, in at least one case, murder. As Fleck dances in front of the crowd, we watch some other nameless clown gun down Thomas and Martha Wayne in front of their son, Bruce. This jarring juxtaposition seems to imply a connection between the two characters, Joker and Batman, but maybe that wasn’t Phillips’ intention.

After all, any of the faceless rioters we see at the end of Joker could easily transform into the Joker later on. It might even be the man who killed Bruce’s parents in a nod to the backstory Tim Burton invented for Jack Nicholson’s Joker in Batman (1989). We never learn this killer’s age, name, or backstory, which also fits pretty well with the traditional portrayal of the Joker as an anarchic force of destruction with no clear identity or motivation.

Then again, this might not matter. Phillips has repeatedly said he has no plans to make a sequel, and there’s no post-credits scene in Joker hinting at a broader Joker-verse. Then again, the director did recently say he’d consider making Joker 2 if he can come up with the right idea, so we wouldn’t rule anything out. At the very least, don’t be surprised if some future DC movie decides to sneak in an Arthur Flick reference as a way to tie this movie into the broader DC Extended Universe.

Joker is in theaters now.