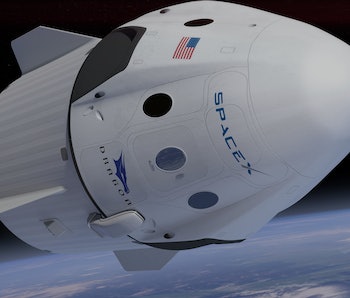 SpaceX’s human-carrying capsule is preparing for its biggest challenge so far.

Following a successful “Demo-1” mission launch in March 2019, Elon Musk’s space-faring firm has been spotted in photos preparing for an in-flight abort test. The test should demonstrate how the capsule would react during an in-launch emergency, protecting the crew from a malfunction with the rocket.

“The SpaceX Falcon 9 rocket and Crew Dragon spacecraft that will be used for the In-Flight Abort test have arrived at SpaceX facilities in Cape Canaveral, [Florida] for preparation ahead of the test!” NASA’s Commercial Crew Twitter account shared on Thursday. Documents filed by SpaceX suggest the test may take place no earlier than November 23.

It’s a big moment for both NASA and SpaceX, working as part of the Commercial Crew program that also includes Boeing’s work on the CST-100 Starliner capsule. The capsules are designed to send astronauts to and from the International Space Station, giving NASA a way to send its crew to the station from the United States.

Ever since the agency ended its shuttle program in 2011, it’s been using Russian agency Roscosmos’ facilities to send up astronauts. These seats, fitted into Soyuz rockets launching from the Baikonur Cosmodrome in Kazakhstan, cost an estimated $80 million each. Alongside time savings, the program would also save NASA from paying for Roscosmos seats.

NASA shared images of the craft gearing up for its big launch:

Another image showed the Falcon 9 getting ready for takeoff:

The in-flight abort test is expected to use the same Crew Dragon capsule as the one used on the “Demo-1” mission. That capsule previously carried 400 pounds of cargo to the station, alongside a dummy called “Ripley” fitted with sensors to understand how humans may experience the capsule. It returned six days later with around 330 pounds of cargo.

Crew Dragon: how to run an abort procedure

The abort procedure, NASA explains, will be conducted at max Q, also known as maximum aerodynamic pressure. This moment is about one minute after launch, about the hardest point to conduct an abort procedure.

Once the capsule reaches max Q, SpaceX will send a command to initiate the abort procedure. That will shut down the Falcon 9’s engines, while also powering up the eight SuperDraco thrusters on the Crew Dragon.

These eight thrusters, SpaceX previously explained, can move the Crew Dragon half a mile in 7.5 seconds, equivalent to a peak velocity of 436 mph. These thrusters have undergone over 700 tests. Ideally, it should be fast enough to escape the rocket during an emergency.

The arrival comes just days after NASA astronauts were spotted trying out the launch pad evacuation procedures. On September 27, the Commercial Crew group shared photos of the astronauts at Launch Complex 39A testing out the emergency escape system:

The results of the test should provide SpaceX with data about how best to proceed with development, validating the design and models.

From there, SpaceX is expected to host a “Demo-2” mission with the first crew members ready to fly. Robert Behnken and Douglas Hurley, the two astronauts preparing to fly on the mission, were spotted in August preparing for the big launch. Behnken is a former Air Force colonel, while Hurley is a former Marine Corps fighter pilot.

The race is on to get the capsule up and running. The Government Accountability Office warned in June that “both contractors have run into chronic delays.” It also called on NASA to come up with a suitable backup plan in case there’s any further delays.

As SpaceX prepares to fly humans for the first time, the report is a sharp reminder that NASA’s future missions depend on the team to get it right.