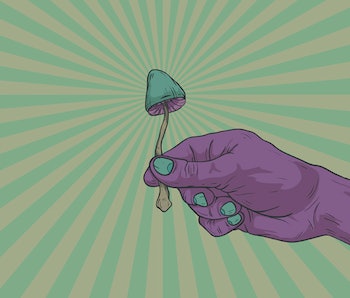 Considered a narcotic with “no legitimate medical purpose” by the United States government, “magic mushrooms” are increasingly linked to promising health benefits. Various clinical trials of relatively small sample sizes have shown that psilocybin, the mushroom’s psychedelic compound, has the potential to treat mental disorders like depression, post-traumatic stress disorder, and addiction. Some scientists predict psilocybin may even replace antidepressants in as soon as five years.

But sourcing and producing psilocybin on a mass scale for research or distribution can be slow, expensive, and require a ton of space to grow. In an effort to solve these problems, scientists at Miami University have discovered a way to produce psilocybin quicker than ever before. They describe their work in the December 2019 issue of Metabolic Engineering.

“In theory, enough mushrooms could be grown, but it is not all that practical,” co-author J. Andrew Jones, Ph.D., tells Inverse. “Our production process, from beginning to end, only takes a few days to complete compared to much longer for mushrooms.”

Jones and his colleagues, including lead author and junior chemical engineering major Alexandra Adams, used metabolic engineering to engineer E. coli bacteria to produce huge amounts of psilocybin, about 1.16 grams per liter per fermentation batch. They did this by relocating the psilocybin-encoding DNA from mushrooms to the bacteria.

Subsequently, the scientists discovered the engineered bacteria can produce a lot of psilocybin — and quickly.

“It’s similar to the way you make beer, through a fermentation process,” Jones explained in a press release. “We are effectively taking the technology that allows for scale and speed of production and applying it to our psilocybin producing E. coli.”

The breakthrough could pave the way toward mass study and production of safe psilocybin therapies, changing the lives of an estimated 300 million people globally who deal with depression.

The researchers also suggest it may be cheaper than other ways of producing psilocybin, as well as open the door for more clinical research to be done. Currently, there are two other ways to produce psilocybin: derive it from mushrooms containing the compound, or produce it synthetically, through a multi-step chemical process. Clinical trials use synthetic psilocybin, which Jones says can be expensive, versus naturally derived psilocybin. This new fermentation process could throw a third approach into the mix.

Veterans in the field, like David Nichols, Ph.D., a pharmacologist and professor at Purdue University, says this alternative approach is interesting, but perhaps not as revolutionary as it seems. Nichols has studied psilocybin for 50 years and produced the drug for Johns Hopkins’ landmark research. He cautions that the fermentation approach may not be as cheap as predicted since it requires expensive equipment and some extra steps.

“If you had the equipment, it probably still isn’t quite as straightforward as synthesis and wouldn’t be as clean,” Nichols says. “The final product would probably require more purification than synthetic material, the way they’ve got it worked out.”

Nichols argues current processes aren’t prohibitively expensive. He estimates psilocybin for one therapy session in a clinical trial would only cost about $100.

Regardless of price, Jones emphasizes that what makes his study unique is the speed underlying the process.

“What’s exciting is the speed at which we were able to achieve our high production,” he explains. “Over the course of this study, we improved production from only a few milligrams per liter to over a gram per liter, a near 500-fold increase.”

Nichols notes that, if the late-stage clinical trials currently examining psilocybin prove positive, then it’s likely Americans could see psilocybin’s FDA approval and widespread therapeutic use of it in as little as a decade. If that happens, drug developers will likely need more sources of high-quality psilocybin to meet clinical demand.

Future psilocybin treatments won’t likely include take home medication or pills you pop daily. In the majority of clinical trials involving the drug, it’s given to patients in a controlled setting with a trained psychiatrist to lead the psilocybin experience. In these treatment sessions, psychiatrists do an extensive history to check if a patient is the right candidate for psilocybin, and helps prepare the patient for what can be an intense experience.

“The importance of the mindset of the patient and the setting of drug administration is vitally important to achieving the desired therapeutic effect,” Jones says.

Nichols, who is now 75, never thought he’d see the day when psilocybin is so close to becoming approved therapy.

“I didn’t think it would happen in my lifetime, frankly,” Nichols says. “I hope I can live another five years and actually see it get approved and actually start getting out there as an approved medicine.”

Psilocybin, the prodrug of the psychoactive molecule psilocin, has demonstrated promising results in clinical trials for the treatment of addiction, depression, and post-traumatic stress disorder. The development of a psilocybin production platform in a highly engineerable microbe could lead to rapid advances towards the bioproduction of psilocybin for use in ongoing clinical trials. Here, we present the development of a modular biosynthetic production platform in the model microbe, Escherichia coli. Efforts to optimize and improve pathway performance using multiple genetic optimization techniques were evaluated, resulting in a 32-fold improvement in psilocybin titer. Further enhancements to this genetically superior strain were achieved through fermentation optimization, ultimately resulting in a fed-batch fermentation study, with a production titer of 1.16 g/L of psilocybin. This is the highest psilocybin titer achieved to date from a recombinant organism and a significant step towards demonstrating the feasibility of industrial production of biologically-derived psilocybin.