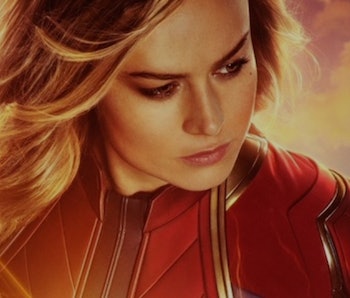 Marvel movie stars showing up in Star Wars is nothing new. Setting aside the fact that both franchises are produced by the same conglomerate, the Marvel Cinematic Universe is 20+ films deep at this point and cycles new actors in and out regularly. At some point, there just wouldn’t be a way to avoid any crossover between the two. Heck, Paul Bettany and Lupita Nyong’o have already played roles in both franchises.

But with the recent announcement that MCU mastermind Kevin Feige would be producing a movie in the Star Wars franchise, it became something of a certainty that we’d see a few more actors make the jump. Before long, rumors that Captain Marvel star Brie Larson would get the call were circulating. It’s understandable. Larson now has a pivotal role in the MCU as Captain Marvel and her solo film performed incredibly well at the box office. She’s also an A-list Oscar. Why shouldn’t she appear in Star Wars? Well, maybe because she’s an A-list Oscar.

Brie Larson is too big for Star Wars

Take a moment to look at the patterns of casting in Star Wars movies. They’re certainly not populated with nothing but unknown actors (heck, Laura Dern showed up in the last one). But your quintessential Star Wars actor has to be able to disappear into their role. There are certainly exceptions here and there (Samuel L. Jackson comes to mind) but actors like Adam Driver, Oscar Isaac, and Natalie Portman are just about as high-profile as the franchise is willing to go with its main characters. These are actors who, when they were cast, may have been recognizable to some and have garnered acclaim for some of their performances, but they’re rarely out-and-out celebrities.

If they throw in an actor with a larger filmography and a more widely recognized name it’s usually someone like Woody Harrelson, Benicio Del Toro, or Paul Bettany, performers with character actor tendencies who can disappear into a role fairly well. And while Lupita Nyong’o may seem like an exception, she pointedly plays a character via motion capture, which makes it a lot harder to recognize her as the megastar that she is.

The MCU, on the other hand, isn’t afraid to play with A-list talent. Jeff Bridges, Angelina Jolie, and Robert Redford are just a few of the massive stars the franchise has managed to sign on over the last 11 years. Oftentimes (especially early on in the franchise’s run) those names have served as part of the draw. They’ll get actors fresh off of Oscar wins or career revivals (it’s no coincidence that 2019 was the year Marvel began publicly courting Keanu Reeves) and use that heat to hype up the next film. It’s part of the allure of the franchise at this point.

None of this is to say that Brie Larson isn’t talented enough for the galaxy far, far away or that her skills don’t match those required to be a part of that world. But at this point in her career, Brie Larson is a megastar to an extent that Star Wars does not allow for. The biggest star of Star Wars is, well, Star Wars. You won’t hear anybody refer to The Rise of Skywalker as “the new John Boyega movie.” An actor in a Star Wars movie has to be able to hold low-enough a profile that viewers can look past the performer and see the character. Right now, with Larson being one of the most recognizable faces in Hollywood, she can’t pull that off without some serious alien makeup or a motion-capture suit.

5 MCU actors perfect for a galaxy far, far away

However, there are a number of actors in the MCU that Feige would do well to bring over. Some of them have played leading roles while others are supporting players. Each has the right profile and the right energy for a Star Wars movie and if the ahem stars align for them, they could be a great addition to a Feige-spearheaded movie in the franchise.

Here are five Marvel actors who could make the leap to Star Wars.

Benedict Wong is quietly one of the standout performances in Infinity War and steals just about every scene he’s in in Doctor Strange (he’s also one of the only good things in Gemini Man). He’s a magnificently talented character actor who has the perfect gravitas to play a smuggler, Jedi, crime lord, or Sith.

Admittedly this could all change after next year’s Eternals, but after a breathtaking turn in Crazy Rich Asians and a small role in Captain Marvel, it feels like it’s her time. Like Wong, Chan has an inherent poise that would translate incredibly well to a Star Wars movie. It’s easy to see her leading one, or stealing a few scenes in a supporting role.

Black Panther is the breakout movie of all breakout movies, but it’s hard to argue that anybody’s profile was elevated by it quite like Duke’s. His role as M’Baku is hilarious and intimidating all at once (and his performance in Us displays a remarkable versatility). We’ve got a feeling Duke could handle whatever Feige throws at him, be it the role of an alien, Jedi, human, or villain.

With the passing of Carrie Fisher and Laura Dern’s Admiral Holdo perishing in The Last Jedi, now’s the time for a new elder stateswoman in the Star Wars universe. Pfeiffer showed us that she’s not afraid to get weird in Ant-Man and the Wasp (as if we didn’t already know it after Batman Returns) and it’s easy to imagine her forming the emotional backbone of a Star Wars movie after that.

Michael Keaton should be in every movie.