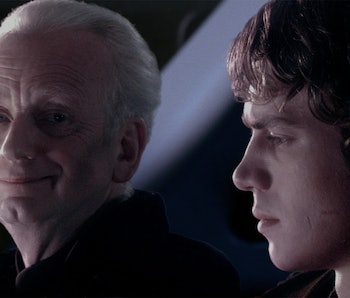 While it’s practically legend that Emperor Palpatine mentored Anakin Skywalker and turned him to the Dark side, there isn’t as much information surrounding Palpatine’s history with Darth Plagueis besides that one brief conversation in Revenge of the Sith. However, with Star Wars: The Rise of Skywalker set to bring the Emperor back for one more romp, we may finally get a more detailed look into his history as a young Sith-in-training.

Warning! Speculative spoilers for Star Wars: The Rise of Skywalker below.

What we do know is that Plagueis the Wise mastered the ability to create life, which his student Darth Sidious (aka, Sheev Palpatine) learned before killing his master. Now, a wild new theory proposes that just like Palpatine “created” Anakin, Plagueis may have created Palpatine. And if that’s correct, it could finally give another iconic Star Wars villain the backstory the deserve.

What if Plagueis also created Snoke? Would that make Palps and Snoke … brothers?

Supreme Leader Snoke’s connection to Emperor Palpatine is one of the greatest and unresolved mysteries of the Star Wars franchise, and one that could possibly be answered in The Rise of Skywalker. We don’t know where Snoke came from, what he was doing before the Empire fell, or how he rose to power after The Return of the Jedi.

A recent Star Wars comic has hinted that the pair have a history and that it was Palpatine’s decree that Snoke lead the First Order and train Kylo Ren. Meanwhile, fans have speculated that their connection is as simple as Snoke being a clone of Palpatine, or that the Supreme Leader served as nothing but a host to Sheev’s essence.

Redditor u/PaleozoicChicken managed to combine bits of each backstory into one theory, and it hinges on the idea that Plagueis created Palpatine first and then worked in Snoke as a backup. Y’know, just in case Palpatine died or something.

“Snoke was created as a backup Palpatine and learned everything from Plagueis as well,” they write. “That’s why he emerges from the shadows in the wake of Palpatine’s death.”

Let’s backtrack a bit. Yes, Plagueis could’ve created Palpatine. However, if he also created Snoke, that would make them brothers. Could that be why Snoke led the First Order? Was he just doing what Plagueis had created him to do by following in Palpatine’s footsteps?

This theory also brings to mind the infamous Star Wars comic, Darth Vader #25, which revealed that Palpatine was directly responsible for Anakin Skywalker’s immaculate conception. This comic provides some merit to the theory that Plagueis (like Palpatine) could have created his apprentice using the Force. After all, Palpatine did say that Plagueis “could use the Force to influence the midi-chlorians to create life.”

However, Darth Plagueis never actually appeared in any of the Star Wars movies, though Palpatine references him in Revenge of the Sith as a way to lure Anakin over to the Dark side. So it’s hard to imagine a character whose influence has only ever been mentioned by Palpatine playing such a major role in The Rise of Skywalker. It’s probably more likely the Emperor will reveal that he also created Snoke as a back-up in case Darth Vader ever turned on him.

Truthfully, if Palps’ connection to Plagueis has been relegated to the sidelines (and offscreen), then it makes it even less believable that Plagueis also created Snoke. That is, unless The Rise of Skywalker offers up a flashback to Palps and Snoke’s time with the Sith lord, which is unlikely even as other leaks claim the movie will begin with a different kind of flashback.

Still, Sheev and Snoke being brothers would certainly make for an interesting twist, but it’s better to bank on Palpatine, not Plagueis, doing the actual creating.