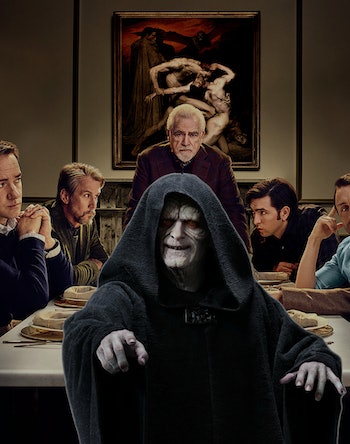 Star Wars is, above all else, a story about family. The Skywalker family, to be specific, which for reasons unknown (unless you read one very icky comic book) churns out the most powerful Force users in the galaxy with a track record for breaking bad more often than good. Succession is also about a powerful family of mostly evil people with a slim shot at redemption; they’re called the Roys.

In Star Wars, the tools of power are Lighsabers and laser guns, in Succession, it’s “hate speech and rollercoasters,” as Roman Roy put in in the show’s most recent episode (the fictional family-owned Waystar Royco empire is like Fox News and Disneyland combined). That may sound like two very different types of families, but a closer look reveals they share more similarities than you might think.

In fact, the cast of characters in Succession and Star Wars pair off almost too easily, and it all starts with the cruel man at the top. Logan Roy and Emperor Palpatine: Are they really all that different?

Here’s who each Succession character would be in the Star Wars universe, and what it reveals about their arcs on the HBO series.

The Emperor’s loyal soldier — until he turns on his old master.

An inept goon who might actually be more capable than we give him credit for.

An imperfect hero with her own sights on the throne.

He lives out in the desert somewhere and doesn’t matter very much.

He always sounds pleasant even when saying something disgusting. Also, they’re both tall.

A potential successor to Palpatine with a mysterious backstory.

An often-overlooked character who may be more useful than everyone thinks he is.

A powerful character who gets cut down by his enemies only to return.

A renegade hustler who’s always quick with a biting joke.

A new challenger to the evil Empire arises, but will she take down the Dark side or become consumed by it instead?