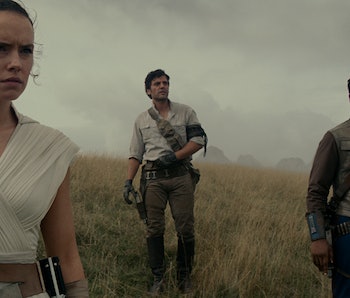 Before J.J. Abrams’ return to the Star Wars franchise, Jurassic World director Colin Trevorrow was all set to helm Star Wars: The Rise of Skywalker. He had written a script and everything. (Everyone remembers how that went down, right?) Before filming began, Trevorrow was fired from the project and replaced by Abrams, who had directed The Force Awakens. So what happened to Trevorrow’s script? A new theory claims that Trevorrow’s unused script has become a source for recent Episode IX leaks.

Redditor u/i_saw_the_movies claims to work on the production side of the film industry and boldly argues two points: 1) that the Star Wars IX leaks all come from Trevorrow’s discarded script and 2) that the details in the leaks are far too specific to have been “obtained legitimately.” The author then shares some second-hand information regarding the actual script of Episode IX.

“The fact that a completely separate script already existed was perfect, they started to leak that to make it seem like it’s the actual script,” the redditor writes, claiming that this was a deliberate move on the part of the filmmakers to “mess with the leak-hunters.”

Lucasfilm is notorious for its efforts maintain secrecy and avoid spoilers getting out about Star Wars movies, so it’s not inconceivable that some misleading leaks could come from the filmmakers themselves. It wouldn’t be the first time in recent memory a major production has gone to considerable lengths to throw rumor-mongers off the trail — remember how Game of Thrones brought long-gone characters like the Waif and Jaqen H’ghar back to “film” at the King’s Landing dragonpit set? Back in April, Abrams told Fast Company he started the project with “no script” and “literally nothing.” If Lucasfilm was unhappy enough with the original vision for Episode IX to completely start over, it’s unlikely it would risk fans comparing Trevorrow’s discarded script against Abrams’ replacement. This would surely rile up the notoriously prickly Star Wars fandom.

While some of the Episode IX leaks we’ve seen thus far make sense in the context of what we already know about the story via official channels, other theories — this one included — are a bit more suspicious. It implies that all of the recent leaks — including the one detailing Palpatine’s plan to siphon Force energy through Kylo Ren and Rey, as well as the leak suggesting Han helping to redeem Kylo — are all a form of classic misdirection.

What’s more, the information in this particular post isn’t all that different from previous leaks. Emperor Palpatine is still the villain and Kylo is still in conflict with the Dark side. The only major distinction in i_saw_the_movies’ version of the story is that Rey may have come from the Force, a far cry from other rumors claiming she’s a clone of Anakin or Palpatine. Not every leak proves to be accurate, but it’s generally a safer bet to trust the word of historically reputable sources over the new kid on the block.