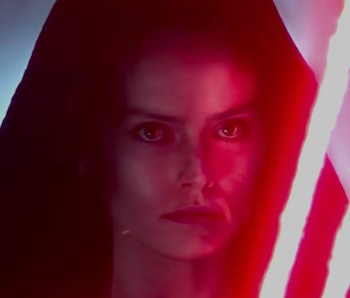 Recent Star Wars: The Rise of Skywalker leaks have revealed that Rey’s connection to Emperor Palpatine is familial, and now a new theory offers an intriguing twist on the idea of her possibly being his granddaughter. Remember the speculation from earlier this year about Hayden Christensen’s possible return as Anakin Skywalker? Well, this intriguing theory suggests that his spirit has been inside Rey this whole time.

Speculative spoilers ahead for The Rise of Skywalker.

Of all the ways that Rey could be confirmed to be Palpatine’s blood relative, this latest theory wasn’t on anyone’s radar. Redditor u/contrabardus theorizes that Rey is actually a reincarnated version of none other than Anakin Skywalker. Yes, it might seem a bit farfetched, but it’s nevertheless a fresh take on the persistent speculation surrounding Rey being Palpatine’s granddaughter.

This theory claims the spirit of Darth Vader was somehow placed inside Rey after Palpatine attempted and failed to bring back his former apprentice. Since Rey is Force-sensitive, this allows Anakin to return without her realizing she’s been playing host to a potential Force spirit (or ghost, from a certain point of view).

As u/contrabardus puts it, the theory is “an in-universe plausible explanation for how she’s able to do the things she does with seemingly no training, why she was so attracted to the Dark Side in the cave, why she reacted to the lightsaber the way she did in TFA,” and more. While the redditor describes Rey as a Mary Sue, which simply isn’t the case, a deeper connection between Anakin, Rey and Palpatine makes sense in light of her centrality to the recent movies.

The theory also draws from the Star Wars Expanded Universe, which has explored the idea of reincarnation and its role in galactic mythology. Could Rey have been a vehicle for resurrecting Anakin? Was that Palpatine’s plan the whole time? It absolutely could’ve been. It also provides some credibility to the leaks about Palpatine needing Rey (and Kylo) to channel the Force after his return. And if Palps wants to create a new and updated Galactic Empire, it makes sense that he’d want Anakin by his side. Who better to help him carry out his plan? Even if Anakin rejects Palpatine, the former emperor put in a lot of effort to train and mentor Anakin, so he’d want him by his side no matter what.

If you’re not familiar with it, the EU included licensed media put out by Lucasfilm — novels, comic books and TV series — that had been considered part of the Star Wars universe prior to Disney buying the franchise. Post-takeover, that era has been renamed Star Wars Legends. While none of the material in the EU is considered canon anymore, it’s still had a clear influence on the sequel trilogy. After all, many of the minds behind The Rise of Skywalker and its predecessors likely read and watched the content put out during the EU time period.

The Episode IX title includes the word “rise,” suggesting that someone is coming back. One theory holds that this returning Skywalker is Anakin. If that turns out to be the case, then his spirit could escape from Rey, leaving her fully in control of herself once more. By that logic, killing and then resurrecting Anakin was Palpatine’s plan all along. Diabolical? Yeah, that’s Palps for you. If nothing else, the theory re-centers reincarnation and the legacy of the EU in relation to The Rise of Skywalker. That in and of itself provides a lot of food for thought.