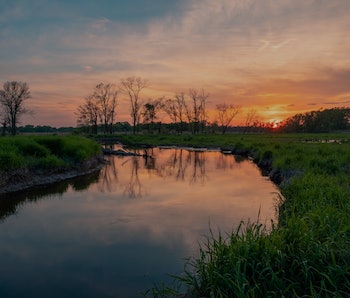 Let’s face it: It’s nearly impossible to avoid a startling array of chemicals, whether they’re in the water we drink, the air we breathe, or the food we eat. Sure, harmful pesticides like DDT may not be on the market anymore, but new chemicals of concern, such as polyfluoroalkyl substances, are finding their way into our bodies.

This class of chemicals, known by the abbreviation PFAS, are found in all sorts of products, including compostable takeout containers. They have been shown to disrupt human hormones and increase the risk of certain types of cancer. In addition to the risks they pose to human health, PFAS are concerning because they remain intact for a super long time in the environment. But new research in the journal Environmental Science & Technology shows that one type of bacteria can actually break down this tough and nasty environmental pollutant.

And of course, it lives in New Jersey.

In a paper published on Wednesday, researchers show that a microbe living in the soil of New Jersey’s wetlands has the unique ability to break down PFAS by severing one of the strongest chemical bonds in all of nature.

Co-authors Shan Huang, Ph.D., and Peter Jaffé, Ph.D., both of Princeton University’s Department of Civil and Environmental Engineering, write that this natural feat of decomposition is made possible by a subtle adaptation that already exists in one bacteria’s natural abilities.

Using the naturally occurring iron in the soil, Acidimicrobium sp. strain A6 — which Huang and Jaffé affectionately refer to as just “A6” — breaks the carbon-fluorine bonds in two common types of PFAS, perfluorooctanoic acid (PFOA) and perfluorooctane sulfonate (PFOS). This particular bond, the strongest covalent bond in organic chemistry, is what makes PFAS so persistent in the environment.

Under normal conditions, A6 consumes ammonium in the soil, turning it into nitrite for energy. This unique strategy for gathering energy from the environment involves getting rid of electrons from ammonium by donating them to iron oxide — a process called Feammox.

To simulate the natural conditions in which A6 lives, Huang and Jaffé put it into soil medium in the lab that’s rich in ammonium and iron, just like its native environment. But in the lab they also added a couple of extra, special ingredients: PFOA and PFOS.

Over 100 days, A6 reduced the concentration of PFOA and PFOS by up to 60 percent. The study’s authors suspect that this happened because A6’s natural ability to sever strong chemical bonds through the Feammox reaction also enables it to sever the carbon-fluorine bond that makes PFAS so tough to degrade.

They’re hopeful that these initial results indicate A6 may be a promising ally in getting rid of PFAS in the environment.

“Given that the Feammox process has been reported in many environmental settings, as long as the pH is acidic and soils are iron rich, the results presented here indicate that under the right conditions, the Feammox process could be stimulated to achieve PFAS biodegradation in contaminated sediments and groundwater systems,” they write.

And while these nasty chemicals may sound exotic, they’re actually increasingly common. Styrofoam takeout containers are increasingly being replaced by compostable ones, and research has shown that the PFAS used to waterproof these containers, remain in the soil when the containers are composted.

So while PFAS may be the worrisome chemicals of our time, there’s a bacteria lurking in the wetlands of New Jersey, and it’s ready to help us out.

Abstract: Incubations with pure and enrichment cultures of Acidimicrobium sp. strain A6 (A6), an autotroph that oxidizes ammonium to nitrite while reducing ferric iron, were conducted in the presence of PFOA or PFOS at 0.1 mg/L and 100 mg/L. Buildup of fluoride, shorter-chain perfluorinated products, and acetate was observed, as well as a decrease in Fe(III) reduced per ammonium oxidized. Incubations with hydrogen as a sole electron donor also resulted in the defluorination of these PFAS. Removal of up to 60% of PFOA and PFOS was observed during 100 day incubations, while total fluorine (organic plus fluoride) remained constant throughout the incubations. To determine if PFOA/PFOS or some of their degradation products were metabolized, and since no organic carbon source except these PFAS was added, dissolved organic carbon (DOC) was tracked. At concentrations of 100 mg/L, PFOA/PFOS were the main contributors to DOC, which remained constant during the pure A6 culture incubations. Whereas in the A6 enrichment culture, DOC decreased slightly with time, indicating that as defluorination of PFOS/PFOA occurred, some of the products were being metabolized by heterotrophs present in this culture. Results show that A6 can defluorinate PFOA/PFOS while reducing iron, using ammonium or hydrogen as the electron donor.