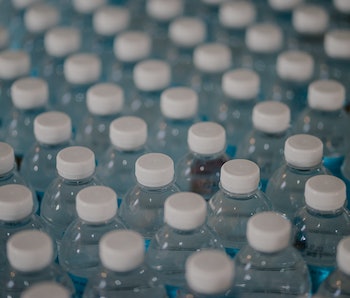 In 2008, consumers began to ditch the popular Nalgene water bottle over concerns about bisphenol A (BPA), a chemical that could leach from it and cause changes to the body’s hormonal system. The public health concerns were so striking that Nalgene reformulated the plastics in its flagship product. An entire industry of packaged food and food container producers followed suit by replacing the chemical with substitute compounds called BPF and BPS. Unfortunately, as a new study reveals Thursday, these plastics aren’t much safer and are still affecting children’s health.

"Replacing BPA with similar chemicals does nothing to mitigate the harms chemical exposure has on our health."

New research in the Journal of the Endocrine Society from New York University School of Medicine scientists shows that urine levels of BPF and BPS — which stand for bisphenol F and S, respectively — are significantly correlated with childhood obesity. While Nalgene’s new formulation does not contain these chemicals, many plastic products still do, including water bottles, the lining of aluminum drink cans, as well as the thermal paper in cash register receipts.

“In a previous study, we found that the predecessor chemical to BPS and BPF — BPA — was associated with a higher prevalence obesity in U.S. children, and this study found the same trend among these newer versions of that chemical,” said first author Melanie Jacobson, Ph.D., M.P.H., a neonatology fellow at NYU Langone Hospital. “Replacing BPA with similar chemicals does nothing to mitigate the harms chemical exposure has on our health.”

In 2012, the US Food and Drug Administration banned plastics containing BPA, which by then had been shown to be an endocrine-disrupting chemical that had been shown to lead to obesity. This move prompted the industry to replace it with BPF and BPS.

As their names suggest, BPF and BPS are not that different from BPA. In fact, all three molecules share a pair of benzene rings that make them look nearly identical.

As such, the team behind the new study is not surprised by the new findings. In their study of adolescents aged 6 to 19, urine samples showed that the majority of them had evidence of BPF and BPS in their systems. Both chemicals were associated with a higher risk of obesity in these kids, with greater exposures correlating with greater risks.

The results confirm that the chemicals replacing BPA offer barely any improvement over their maligned ancestor — something their chemistry alluded to.

“In light of this,” the team writes in the paper, “the potential health effects of BPS and other BPA replacement compounds should be monitored going forward, given that human exposure to these compounds is likely to continue to increase in the future.”

If anything, it’s surprising that scientists haven’t sounded the alarm sooner.

In a 2015 study in the journal Environmental Health Perspectives, a systematic review of the available literature came to the following conclusion: “Based on the current literature, BPS and BPF are as hormonally active as BPA, and they have endocrine-disrupting effects.”

Johanna Rochester, Ph.D., who conducted that study as a researcher at The Endocrine Disruption Exchange, told Time in 2015 that the results were already clear-cut back then.

“According to pretty much all the literature there is on these two substitutes, they are hormonally active in ways similar to BPA — similar mechanisms, similar potencies,” she said.

Work like this is slow to confirm. BPF and BPS are both quickly metabolized by the human body, which means that they aren’t detectable in urine samples — like those used in the latest study — for very long.

“This is problematic when assessing these chemicals in relation to obesity, which occurs incrementally over time and has a multi-factorial etiology,” Jacobson and her team write.

Additionally, since this is not a randomized controlled trial, the correlation that the researchers observed between exposure to BPF and BPS and obesity in these children can’t be characterized as causal.

Notably, since these chemicals occur most commonly in food packaging, it’s possible that the children’s exposure to food is a confounding factor. However, when the team did account for this possibility by adjusting for caloric intake, the effect remained significant.

So what may have once seemed an easy solution to the BPA problem has just kicked the can down the road. Perhaps the next solution won’t be another bisphenol.

Abstract: Bisphenol A (BPA) has been recognized as an endocrine disrupting chemical and identified as an obesogen. Although once ubiquitous, human exposure to BPA is declining due to its substitution with other bisphenols. Two structurally similar substitutes, bisphenol S (BPS) and bisphenol F (BPF), have raised similar concerns, although fewer studies have been conducted on these newer derivatives. We used data from the US National Health and Nutrition Examination Surveys from the years 2013-2016 to evaluate associations between BPA, BPS, and BPF and body mass outcomes among children and adolescents aged 6 to 19 years. Concentrations of BPA, BPS, and BPF were measured in spot urine samples using high performance liquid chromatography with tandem mass spectrometry. General obesity was defined as ≥95th percentile of age- and sex-standardized body mass index (BMI) z-scores according to 2000 US norms. Abdominal obesity was defined as ratios of waist circumference to height ≥0.5. BPA, BPS, and BPF were detected in 97.5%, 87.8% and 55.2% of urine samples, respectively. Log-transformed urinary BPS concentrations were associated with an increased prevalence of general obesity (OR=1.16, 95% CI: 1.02, 1.32) and abdominal obesity (OR=1.13, 95% CI: 1.02, 1.27). BPF detection (vs. not detected) was associated with an increased prevalence of abdominal obesity (OR=1.29, 95% CI: 1.01, 1.64) and continuous BMI z-score (β=0.10, 95% CI: 0.01, 0.20). BPA and total bisphenols were not statistically significantly associated with general obesity, abdominal obesity, or any body mass outcome. This study suggests that BPA substitute chemicals are correlated with obesity in contemporary children.